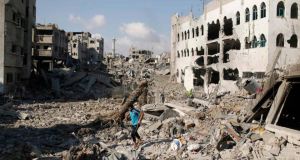 ‘In this context, all inhabitants of Gaza and indeed the entity itself can be – and have been – declared legitimate targets.’ Above, the Shejaia neighbourhood, which witnesses said was heavily hit by Israeli shelling and air strikes during an offensive, in the east of Gaza City on July 26th. Photograph: Suhaib Salem/Reuters

The scale and nature of the Israeli assault on Gaza – destroying every piece of basic infrastructure available and predictably inflicting civilian deaths on a grand scale – has resulted not from extreme belligerence towards Palestinians but from a settled strategy Israeli leaders hope will soon be adopted (insofar as it has not been adopted already) by western powers in prosecution of the “war on terror”. On this reading, the repeated massacres cannot be put down to soldiers and air crews following irresponsible orders (or being the worst shots in the world). The devastation is coldly deliberate.

The assault is an expression of the Dahiya doctrine. The title refers to the Dahiya neighbourhood of Beirut, devastated in August 2006 in retaliation for the failure of the Israeli Defence Forces (IDF) to defeat Hizbullah in clashes in southern Lebanon during which large numbers of civilians were either directly killed by bombs or crushed as they huddled in the rubble of their homes.

In October 2006 the head of Israel’s northern command, Maj Gen Udi Adam, resigned, taking responsibility for the failure. He was replaced by Gadi Eizenkot, previously military secretary to the office of the prime minister, subsequently deputy chief of the general staff.

The author of the IDF’s code of conduct, professor of practical ethics at Tel Aviv University, Asa Kasher, incorporated the Dahiya doctrine into his rules of battle. The fact that the IDF employs an embedded ethicist is one of the bases for the regular claims of Israeli spokespersons that Israel’s is “the most moral army in the world”.

Kasher argues from social contract theory that the state has an imperative duty to protect its citizens, including soldiers in battle, and that this extends to killing the neighbours of enemy combatants.

Kasher fancied that the doctrine might prove popular with other powers. “We in Israel are in a key position in the development of law in this field because we are on the front line in the fight against terrorism. This is gradually being recognised both in the Israeli legal system and abroad . . . I am optimistic enough to assume that the world will soon acknowledge Israel’s lead . . . My hope is that our doctrine . . . will be incorporated into customary international law.”

Thus, a threat to the lives of Israelis, civilian or military, from Hamas rockets – albeit fired in response to Israel’s abandonment of a non-aggression pact Hamas had faithfully maintained for more than a year – is enough to justify all-out war. To say this is not to defend Hamas’s use of a tactic that makes civilian casualties – to put it no higher – fairly likely.

The spirit of the doctrine infused the text of the advertisement published in the Guardian on August 4th, headed “Jews rejected child sacrifice 3,500 years ago . . . now it’s Hamas’s turn”.

The bluntness of the statement apparently offended many readers of the paper. But it was no more than a restatement of the defence of the mass killing of children which was being offered day in and day out by various Israeli spokespersons.

The actions were intended to defend Israeli citizens from Hamas attacks: the way to stop the killing of Palestinian children, then, was for Hamas to desist. Or to put it another way – surrender or we’ll keep on killing your kids. The sentiment was exactly in line with Eizenkot’s precepts.

It would, of course, be simplistic to try to compress every Israeli action and attitude into the pattern of the Dahiya doctrine. But it would be worse than simplistic, it would be an evasion of the facts of the matter, to try to analyse or understand Israel’s behaviour without reference to the doctrine.