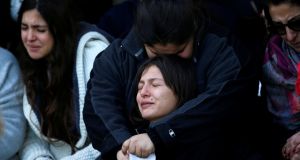 Family and friends of Israeli soldier Shir Hajaj, who was killed on Sunday by a truck driver, mourn during her funeral in Jerusalem on Monday. Photograph: Ronen Zvulun/Reuters

Four Israeli soldiers killed in a truck ramming in Jerusalem by a Palestinian assailant were to be buried as Israeli police said they had arrested nine people in connection with the attack.

The victims of Sunday’s attack have been named as Lt Yael Yakutiel (20), of Givatayim, and cadets Shir Hajaj (22), from the settlement of Maale Adumim, Shira Tzur (20), from Haifa, and Erez Orbach (20), who came from the West Bank settlement of Alon Shvut and was a US-Israeli citizen.

The nine detained included family members of Fadi al-Qanbar, the Palestinian who drove his truck into a group of soldiers disembarking from a bus at a popular tourist outlook in Jerusalem during a visit organised for officer trainees.

The attack also left a fifth soldier in a coma in intensive care and 17 other people injured.

The UN Security Council joined other world leaders in condemning the attack. “The members of the security council condemned in the strongest terms the terrorist attack in Jerusalem,” the UN said in a statement.

Hajaj’s mother, Meirav, told Israeli media that when the family learned of the attack, they had initially thought that tourists would have been the target, not realising that Shir was also visiting the promenade.

“We stood by the door, praying that they [the officers tasked with informing soldiers’ families of their death] wouldn’t come,” she told the Ynet news site.

“And every minute they didn’t come, we said it was a good thing. I called hospitals, local IDF [Israel Defence Forces] offices and everywhere else.

Her father added: “These are our children, we send them to the army knowing they may not come back. Did I ever think this would happen to me? Never.”

The attack, the deadliest in months, comes at a time of warnings about growing tensions, not least over Donald Trump’s highly controversial plan to move the US embassy to Jerusalem, and calls from some right-wing Israeli ministers to annex parts of the occupied Palestinian territories.

The attack drew a confused and angry response from Israeli political figures and analysts, with Israeli prime minister Binyamin Netanyahu and his defence minister Avigdor Lieberman trying to connect it to Islamic State, also known as Isis.

Despite some similarities to truck attacks in Berlin and Nice in 2016, which were claimed by Isis, the use of vehicles by Palestinian attackers for deadly assaults has a history that predates last year.

Others said the ramming appeared to have had more in common with the wave of lone-wolf attacks that have taken place in Israel and the Palestinian territories over the past 15 months.

No one has claimed responsibility for the attack, and Palestinians with no known links to Isis have carried out ramming attacks in the past.

The attack was welcomed, however, in statements by the Islamist group Hamas. “This truck attack shows that any attempt to put a stop to the resistance will fail,” the group’s military wing posted on Twitter.

Qanbar’s sister insisted: “He didn’t belong to any group or political movement. He carried out the attack on his own.”

Israeli police said the driver was from Jabel Mukaber, an area of Israeli-occupied east Jerusalem not far from the scene of the attack. Some media reports suggested Israeli licence plates on the vehicle meant it had been stolen.

Qanbar was shot dead by other soldiers and a tour guide.

Graphic security camera footage shot from a distance showed the truck racing towards a group of soldiers standing by their bus and then driving through the group, scattering bodies. After a gap of a few seconds the truck is seen reversing into them again.

Commenting on the arrests following the attack, police spokeswoman Luba Samri said five of the attacker’s relatives were among those detained. They are all from Jabel Mukaber.

Police used concrete slabs on Monday to block some entrances to the neighbourhood, and a police officer checked each car leaving it.

Overnight, police said, Palestinians shot fireworks at Israeli forces at a police post near the neighbourhood.

The attack came amid a charged mood in Israel following last week’s manslaughter conviction for an Israeli soldier who fatally shot a wounded Palestinian attacker.