As Iraqi forces advance, the sky in nearby Qayyara is black and people are covered in soot 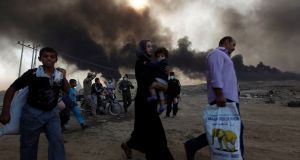 Civilians return to their village after it was liberated from Islamic State militants, in Qayyara, south of Mosul, Iraq. Photograph: Alaa Al-Marjani/Reuters 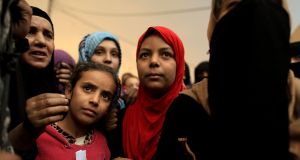 Displaced people gather to complain about the lack of food supplies outside a processing centre as smoke from a burning oil refinery blankets Qayyara, south of Mosul, Iraq. Photograph: Zohra Bensemra/Reuters

The sky is dark and heavy at noon in Qayyara, where oil wells have been burning since Iraqi forces pushed Islamic State out weeks ago. The jihadi militants may no longer control the town, but they unleashed a lasting revenge by setting the wells ablaze.

Every few hours, when the wind shifts, the black smoke billowing across the sky from the wells is mingled with an effusion of white – clouds of sulphur that are spreading from the Mishraq plant near Mosul, the last Iraqi city still under control of Islamic State, also known as Isis.

Just as they did with the oil wells, the extremists set the plant alight before they withdrew, underlining the scale of destruction Isis is leaving in its wake as Iraqi forces advance on Mosul. As well as its extensive use of explosive devices and suicide bombs, Isis has been setting fire to factories and oil wells to help cover its retreat. Such tactics are aimed not only at slowing Iraqi forces but also obscuring the targeting of coalition war planes.

Two months ago, the recapture of Qayyara, 60km south of Mosul, signalled the start of the offensive to retake Iraq’s second city, which officially began a week ago. These days, smoke obscures the sun, and the sheep and young boys shepherding them are covered in soot. It is an almost apocalyptic-looking scene in an area that should be celebrating life after Isis.

“We’re being completely wrecked here. We get rid of one problem, and we face another. Now, with the sulphur coming, this oil smoke is starting to seem normal,” says Amar (22), who asks not to use his real name because, like many in this area, he has family still in Isis-held areas. “Just half an hour ago, the wind blew it [the sulphur] in this direction, and I couldn’t even open my eyes.”

Iraqi forces roll past Qayyara’s squat concrete buildings on tanks, wearing gas masks or surgical face masks. Locals like Amar simply wrap a scarf around their faces, but still the sulphur gas creeps in – it creates a painful tickling sensation in the throat, and a headache.

More than 1,000 people have been treated for breathing problems due to the plant leak, according to Reuters.

“It is horrific for biodiversity and human health, but in the long term it will not have a hugely damaging impact,” says Justin Bronk, a military expert at Royal United Services Institute, a security think tank.

He says the fumes, while sometimes uncomfortable, will not be lethal if military forces contain the fire. Iraqi forces said at the weekend they had controlled the blaze.

But Bronk says Isis attempts to disrupt life and use toxic agents will only increase the more the Iraqi army and Kurdish Peshmerga forces close in on Mosul.

“This is a form of scorched earth policy,” he says “They want to make it terrible to go back. They want to keep a lingering suspicion: is there something in the water? In the air? It’s doing the most you can do to destroy a sense of normality.”

The US has also expressed concerns that the militants could use chemical weapons. Experts who have studied Isis weapons, such as the Sahan group, brought in by Iraq’s Kurdistan regional government, say the group could have a stock of chlorine and old mustard gas shells seized from army bases.

“They don’t use the chlorine to kill, they use it soften up our fronts – to scatter forces so they \Isis] can try to attack,” said one Kurdish security official.

Bronk said the mustard gas has likely degraded, but could cause extreme blistering on the skin and even in inside the body, such as the lungs. But, he says, it is not likely to be fatal – the bigger threat is the lasting psychological impact.

“Also, our children don’t normally look like this,” he adds, almost apologetically, pointing to faces blackened from smoke. “Me, I’ve been facing this oil fire the past 50 days and I’ve built up my defences. But a lot of other people can’t take it, we have a lot of people falling sick.”

Still, he and other residents insist they will remain in the town. “The smoke is destroying us,” he says. “But this is our home.”