In the jaws of Syria’s conflict, Christian faith prospers 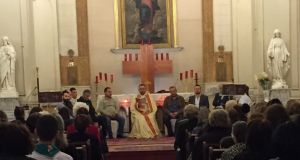 The streets of the Old City are alive with hymn singing and perfumed with incense and jasmine as Christians flock to churches to mark the crucifixion of Christ.

The police have closed main streets to vehicles, making way for tens of thousands of pedestrians. A Christmas tree still stands at the entrance to the Christian quarter; the cobbles underfoot are polished by centuries of wear. Shops selling snacks, clothes, toys, food and mementos are open. Lights blaze after years of power-rationing.

A burst from a machinegun fired into the air at a wedding or a funeral rattles no one, although last week these streets were empty, shops were closed and families hid at home.

Mortars shot by insurgents in eastern Ghouta struck churches, schools and houses. Now the armed groups observe a ceasefire and negotiate surrender or evacuation to a distant province. “Christians who left the country will start coming back,” says Joseph, who guides my colleague Karin and me to seven churches traditionally visited on Holy Thursday night.

Syria is caught between two Easters. The Catholic one this Sunday, the Orthodox one next Sunday. Christians make the rounds of each other’s churches in a popular celebration of Jesus’s life, death and resurrection. Ecumenicism is at work in Damascus, the cradle of Christianity.

We begin at the Maronite Catholic Church of St Anthony as the priest prepares to wash the feet of several men standing beside him before the altar to commemorate Jesus’s bathing the feet of his disciples before the Last Supper. The church slowly fills while the choir sings sweetly from the gallery.

At St Francis Latin Catholic Church, 11 elderly men, five in wheelchairs and six on chairs, sit facing each other at the front of the congregation while a priest with a fine, sonorous voice sings the Mass. Incense hangs in the air. Red carnations and white lilies decorate the church’s many altars.

We make our way along the Street Called Straight to the entrance to St Paul’s Syriac Catholic Church where Joseph pauses to greet a grey-bearded soldier on guard, his assault rifle slung from his shoulder, and to pluck a cube of sweet bread from a basket held by a girl scout. The scouts are out in force tonight, tending to the throng of visitors. The music here is in a very different style to the other two churches, the language of the Mass the same: Arabic, the tongue of most congregations.

We make a detour from our set route down a narrow street where, along both sides, candles in white paper bags decorated with crosses light the way to the first Christian church, named for St Ananias. He was told by Jesus in a vision to go to a house where he would find and heal Saul of Tarsus, blinded by Christ on the road to Damascus. Ananias objected as Saul persecuted Christians but followed his master’s command, laid his hand on Saul, restoring his sight and transforming him into Paul.

Down a flight of steps are two small caves where early Christians worshipped in secret, fearing persecution by the pagan Romans. The rooms are simply furnished, one with an altar and the other with a series of pictures depicting the story of Paul. He escaped capture by fleeing to the site of St Paul’s Church, which we have just visited. Here, at the wellspring of Christianity, the church is filled with chatting, cheerful teenagers, the future of the faith in this ancient land.

The next house of God, the fourth we have on our programme, is the massive Zeitoun Greek Catholic (Melkite) church. Spotlights set behind the building range across the sky. A giant television screen mounted on a frame in the courtyard shows Patriarch Joseph Absi carrying a huge cross in a procession within the church, tightly packed with the faithful.

A woman asks where I come from. “Cyprus, ” I reply. “Welcome, welcome,” she says, yielding her place and pushing me forward so I can glimpse the procession making its final round of the church. A Muslim woman in a white headscarf is here with friends.

The streets are filling. We meet Joseph’s son and his girlfriend on our way to the Syriac Orthodox Church of St George. People come, listen to the choir, cross themselves and pause to recall the April 23rd, 2013, kidnapping of Aleppo’s Greek Orthodox bishop Boulos (Paul) Yazigi and Syriac Orthodox bishop Gregorious Yohanna (Gregory John) Ibrahim while on a mission to free two priests who had been abducted earlier. Despite rumours of their release, the clerics have never been seen since.

Asked how many churches there are in the Old City, Joseph reels them off by denomination, reaching 15, not counting chapels. Then, of course, there are churches elsewhere. “On this night some people cross to the new city to attend services there,” he says. “They keep going till 11 or 12 before going home. When I was a teenager I used to spend the night visiting churches with my friends. Before long the streets will be packed.”

St Therese’s Chaldean Catholic Church, our sixth, has few visitors. The priest at the Armenian Catholic Church of the Immaculate Conception, our seventh, proclaims the Mass in Armenian. A young man outside takes us around the back to the school to show us the place where a mortar struck last week, the hole patched with cement but not yet painted white to blend with the wall.

Groups of friends and families pause in their rounds to drink coffee, tea and wine at restaurants and cafes open late for the celebration.

In the West the faith languishes; Christianity, plagued by war, remains vigorous in Damascus, from where St Paul launched his mission to the world.