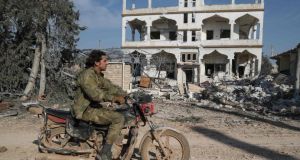 A rebel fighter rides a motorcycle past a destroyed house in the village of al-Nayrab, 14km south-east of the city of Idlib in northwestern Syria. Photograph: Omar Haj Kadour/AFP via Getty

After weeks of clashes that killed scores of Turkish and Syrian soldiers, a truce hammered out by Ankara and Moscow has brought some days of much-needed calm to the province of Idlib. But in the rubble-filled towns and villages of Syria’s last rebel-held enclave, few Syrians believe the peace will last.

“We call it the killer ceasefire,” said Abdulkafi, an activist and teacher who has remained in Syria throughout its nine-year civil war. “Because what’s coming after it is destruction.”

The ceasefire was reached after six hours of talks between Russian president Vladimir Putin and Recep Tayyip Erdogan, his Turkish counterpart, in Moscow on Thursday.

Prior to the deal, Turkish forces had been battling to fend off a Syrian regime assault on Idlib, dragging Ankara deeper into the conflict and risking a direct clash between Russia, president Bashar al-Assad’s staunchest supporter, and Nato member Turkey, which has long backed Syrian rebels seeking his downfall.

The agreement averted that danger and brought some respite to the war-ravaged province.

Yet most analysts share the doubts of Idlib’s weary three million inhabitants that the deal will provide a long-term solution, given Mr Assad’s resolve to reclaim “every inch” of Syria.

“Obviously, the agreement that was reached is temporary,” said Vladimir Evseev, deputy director of Russia’s CIS Institute. “Most likely, we will [in the months ahead] approach a new crisis with Turkey.”

Mr Assad’s troops, backed by Russian fighter jets, had pushed deep into Idlib in recent months, forcing about 900,000 to people to flee and head north towards the Turkish border where they are crammed into muddy camps.

The ceasefire freezes the fighting on the existing front lines and creates a buffer zone along the strategic M4 highway that dissects Idlib province and will be policed by joint Turkish-Russian patrols. The deal achieves Mr Erdogan’s aim of halting the fighting, but represents a concession on his previous demand for Syrian troops to withdraw from newly captured territory as it leaves a much smaller patch of land under Turkish control.

“The Turkish media is presenting the deal as a victory but, on the ground, for Erdogan, it is the opposite,” said Kerim Has, a Moscow-based analyst of Turkish-Russian relations.

The two-page joint memorandum signed in Moscow contains just three agreed outcomes. Russia and Turkey have committed to more talks in the days ahead to thrash out key details.

Analysts said a sticking point would be the contentious issue of dealing with Islamist groups in Idlib. Previous accords have involved Turkey agreeing to separate the jihadist group Hayat Tahrir al-Sham (HTS) from other armed factions in the province – a commitment Ankara has been unable to fulfil.

While there were no specifics in the text of the deal, Aydin Sezer, a former Turkish diplomat, said Ankara would be expected to control HTS. “If not, unfortunately I am afraid that Russia will do it itself,” he said.

The memorandum did, however, contain a commitment to “eliminate all terrorist groups” in Syria. Mr Has said it would give Mr Assad and Mr Putin – who have long targeted civilians under the guise of fighting terrorism – a ready-made excuse for launching renewed attacks.

“The pretext is already written and announced in the deal,” he said. “After a period of time we will see rising clashes between opposing groups.”

Idlib’s civilians were disappointed that recently captured towns and villages would remain in the hands of Mr Assad’s forces, dashing their hopes of returning home.

“If you want the opinion of people in the north, no one is pleased with the statements,” said Obaida Abu al Bara, an activist in Idlib. “People were hoping to go back to their villages.”

Few had faith in Mr Erdogan’s vague promise of protection for those who wanted to return.

The Turkish president has faced a difficult balancing act in recent weeks as he has poured troops and equipment into Idlib to counter the Syrian regime’s assault. With rising domestic anger in Turkey over the country’s hosting of 3.6 million Syrian refugees, he was desperate to prevent a fresh influx of people.

Turkish drone and artillery attacks inflicted significant damage on Mr Assad’s forces, but the offensive also carried a heavy toll for Ankara, with 59 Turkish soldiers killed since the beginning of February – 34 in a single attack.

Further fighting would have risked a public backlash, and jeopardised Turkey’s relationship with Russia, which extends to energy, trade, tourism and defence.

“Turkey is stuck in this asymmetrical relationship with Russia where Erdogan doesn’t call the shots, Putin does,” said Soner Cagaptay, author of Erdogan’s Empire: Turkey and the Politics of the Middle East.

A poll last month by Istanbul Economics Research, a consultancy, found the biggest concern for the Turkish public was the loss of more soldiers.

Can Selucki, the consultancy’s director, said the “enemy” in Idlib was less clear in the eyes of the Turkish public than it had been in previous Turkish operations, which targeted Kurdish militants. “Therefore the reasoning, the justification was not there,” he said. – Copyright The Financial Times Limited 2020