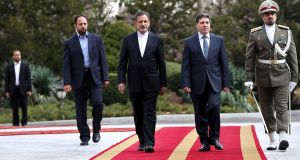 Syrian government forces are winning the war with rebels and would not rest while a single enemy fighter remained at large, Syria’s prime minister Wael Halki said today.

Maintaining Syria’s unyielding response to Western calls for president Bashar al-Assad to step aside, Mr Halki said the era of “threats and intimidation has gone, never to return, while the era of victory and pride is being created now on Syrian soil”.

He was speaking during a visit to Iran, which has provided military support and billions of dollars in economic aid to Assad during a two-year-old civil war that has killed 100,000 people and shows little sign of being halted by diplomacy.

The United Nations said on Monday that a long-delayed “Geneva 2” peace conference would go ahead on January 22nd.

The government and the political opposition have both said they will attend, but rebel fighters on the ground have scorned the talks.

Assad, whose forces have consolidated their hold around Damascus and central Syria this year, faces little pressure to make concessions to his opponents as long as he maintains military momentum and Iranian support.

Mr Jahangiri replied that Iran stood “in the same trench alongside Syria, supporting it at all levels against the aggressive axis of evil” aligned against Damascus, Sana said.

Iran has sent military commanders to Syria to help Assad’s army, which is also bolstered by the pro-Iranian Lebanese Hizbullah militia and Iraqi Shia fighters. They are battling rebels whose ranks are swollen by an influx of Sunni Islamist fighters from across the Muslim world.

The size of Mr Halki’s delegation, which included Syria’s energy, electricity, health and foreign ministers, reflected the importance of the alliance between the two countries. Sana said they had discussed activating Iran’s multi-billion dollar credit facility to Damascus, bringing Iranian companies back to Syria’s war-ravaged economy and speeding up deals to provide oil products, medical equipment and food.

Assad’s forces, backed by Hizbullah and local militias, have been fighting to secure the mountainous Qalamoun region overlooking the main highway north of Damascus to the central city of Homs and Assad’s Alawite heartland on the Mediterranean.

Activists said warplanes had bombarded targets around Nabak, the main town on the road outside government control, and dropped bomblets on parachutes that ignited fires. “So far we have three martyrs in Nabak,” said a local pro-rebel activist, speaking by Skype, who identified himself only as Abu Rakan. “In Rima, between Yabroud and Nabak, MiG and Sukhoi planes have carried out eight bombing raids.”

Sana said the army “eliminated a number of terrorists in Nabak and the surrounding area”, and also made gains in rebel districts to the east of Damascus, a mix of farmland and urban sprawl known as the eastern Ghouta, and suburbs to the south.

Casualties on both sides have been heavy, with Hizbullah losing at least 25 fighters in eastern Ghouta over the last week, according to security sources in Lebanon. The Syrian Observatory for Human Rights, a British-based monitoring group, said more than 400 people had been killed across Syria since Thursday, many of them in the battles around Ghouta and Qalamoun.