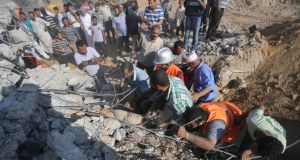 Palestinians search for victims under the rubble of a house which witnesses said was destroyed by an Israeli air strike during an Israeli ground offensive east of Khan Younis in southern Gaza today. Photograph: Ibraheem Abu Mustafa /Reuters 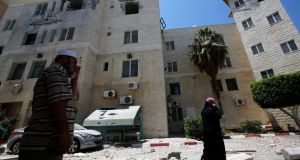 Israel won a partial reprieve from the economic pain of its Gaza war today with the lifting of a US ban on commercial flights to Tel Aviv, as fighting pushed the Palestinian death toll over 700.

Israel says it needs more time to eradicate cross-border tunnels used by Hamas for attacks, while the Palestinian Islamists demand the blockade on the Gaza Strip be lifted.

With Washington’s encouragement, Egypt has been trying to mediate a limited humanitarian ceasefire. One Cairo official said yesterday that could go into effect by the weekend, in time for the Eid al-Fitr festival, Islam’s biggest annual celebration, which follows the fasting month of Ramadan.

But a senior US official described any truce by the weekend as unlikely, as did an Israeli cabinet minister who said the hunt for tunnels would take at least four days to complete.

“I do not see a ceasefire in the coming days where the IDF (Israel Defence Forces) leave,” science minister Yaakov Peri, a former security chief who advises Israel’s top strategic decision-makers, told the Walla news site. “Even if there is a humanitarian truce, we would continue tackling the tunnels.”

The death toll in Gaza reached 718 today as Israeli tank fire and other pre-dawn assaults killed 26 people in the Hamas-dominated coastal enclave, including six members of the same family, Palestinian health officials said.

In southern Khuzaa and Abassan villages, they said, Israeli shelling left dead and wounded under rubble, while medical crews could not risk attending.

Israel has lost 32 soldiers to clashes inside Gaza and with Hamas raiders who have slipped across the fortified frontier in tunnels. Rocket and mortar shelling by Hamas and other Palestinian guerrillas has killed three civilians in Israel.

Such shelling surged last month as Israel cracked down on Hamas in the occupied West Bank, triggering the July 8th air and sea barrage in Gaza that escalated into an invasion a week ago.

Though Israel’s Iron Dome rocket interceptor has shot down most of the rockets fired from Gaza, one that came close to Tel Aviv’s Ben Gurion Airport on Tuesday prompted the US Federal Aviation Administration (FAA) to bar American flights there.

The ensuing wave of cancellations by foreign airlines emptied Israel’s usually bustling international gateway and hurt its hi-tech economy at the height of summer tourist season. It was hailed as a victory by Hamas, and prompted an appeal by Israeli prime minister Benjamin Netanyahu for the Obama administration to intervene.

The FAA said that after reviewing the security situation it had cancelled the ban late yesterday. US Airways, a unit of American Airlines Group Inc, said on Thursday it was resuming its non-stop Tel Aviv to Philadelphia service.

Israel predicted other US airlines would follow suit within hours, though European carriers could take longer. Germany’s Lufthansa and Air Berlin said their suspension of flights to Tel Aviv would continue to Friday.

“The Europeans did not really deliberate over this, but acted more as a follow-up to the American decision,” said Gadi Regev, chief of staff for Israel’s Civil Aviation Authority.

A number of European flights have been diverted to Cyprus’s Larnaca airport for onward travel to Ben Gurion on Israeli carriers.

In what appeared to be let-up in Palestinian attacks, the Israeli military said today only one rocket had been launched from Gaza overnight. It fell wide, causing no damage.

Hamas leader Khaled Meshaal said his fighters had made gains against Israel and voiced support for a humanitarian truce, but only if Israel eased restrictions on Gaza’s 1.8 million people, who are also under an embargo by next-door Egypt.

“Let’s agree first on the demands and on implementing them, and then we can agree on the zero hour for a ceasefire ... We will not accept any proposal that does not lift the blockade ... We do not desire war and we do not want it to continue, but we will not be broken by it,” Mr Meshaal said yesterday in Qatar.

Israel also came under criticism from the UN High Commissioner for Human Rights, Navi Pillay, who said there was “a strong possibility” Israel was committing war crimes in Gaza, where medical officials say most of those killed were civilians.

A furious Netanyahu denounced the inquiry as a “travesty”.

“The HRC should be launching an investigation into Hamas’s decision to turn hospitals into military command centres, use schools as weapons depots and place missile batteries next to playgrounds, private homes and mosques,” he said in a statement.

UN secretary-general Ban Ki-moon, who has also been on a truce-seeking mission, lashed out at militants in Gaza by expressing “outrage and regret” at rockets found inside a UN school for refugees, for the second time during the conflict.

Ban said storing the rockets in the schools “turned schools into potentially military targets, endangering the lives of innocent children”, along with U.N. employees and the tens of thousands of sheltering Palestinians. He urged an investigation.

US scretary of state John Kerry returned to Egypt on Wednesday after meeting Palestinian president Mahmoud Abbas in the occupied West Bank and with Ban and Netanyahu in Jerusalem.

“We have certainly made some steps forward. There is still work to be done,” said Kerry, on one of his busiest regional visits since Netanyahu called off U.S.-sponsored peace talks over Abbas’s power-share deal with Hamas in April.

Gaza has been rocked by regular bouts of violence since Israel unilaterally pulled out of the territory in 2005.

Hamas, which rejects Israel’s right to exist, balked at Egypt’s proposal for an unconditional truce, saying its conditions had to be met in full before any end to the conflict. Israel briefly held fire last week at Cairo’s behest.

The war is exacting a heavy toll on impoverished Gaza. Palestinian officials say at least 475 houses have been destroyed by Israeli fire and 2,644 damaged. Some 46 schools, 56 mosques and seven hospitals have also suffered varying degrees of damage.

Israel says one of its soldiers is missing in Gaza, and the military believes he might be dead. Hamas says it has captured him but has not released a picture of him in their hands.