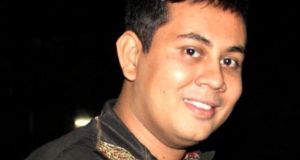 Niloy Chatterjee (40) a blogger who advocated secularism, was killed in his flat in the capital, Dhaka, said police official Mustafizur Rahman.

A blogger was hacked to death in Bangladesh on Friday, the fourth killing of an online critic of religious extremism in the Muslim-majority country in less than six months.

Niloy Chatterjee (40) a blogger who advocated secularism, was killed in his flat in the capital, Dhaka, said police official Mustafizur Rahman.

In his writing, Chowdhury had demanded capital punishment for Islamist leaders convicted of war crimes during Bangladesh’s war of independence in 1971.

A tribunal has since convicted several senior leaders of an Islamist party, who in 1971 opposed the breakaway of Bangladesh, then known as East Pakistan, from Pakistan, of various crimes.

Militants have targeted secularist writers in Bangladesh in recent years, while the government has tried to crack down on hardline Islamist groups seeking to make the South Asian nation of 160 million a sharia-based state.

In February, machete-wielding assailants hacked to death a US citizen of Bangladeshi origin and critic of religious militancy, Avijit Roy, and seriously injured his wife and fellow blogger, Rafida Bonya Ahmed.

They were attacked in Dhaka after leaving a book fair.