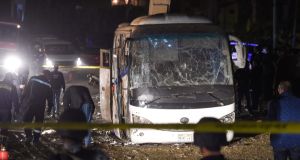 The scene of an attack on a tourist bus in Giza province south of the Egyptian capital Cairo. Photograph: AFP/Getty Images

Three Vietnamese tourists and an Egyptian guide were killed and at least 10 others injured when a bomb blast hit their bus yesterday less than 4km (2½ miles) from Egypt’s world famous Giza pyramids, authorities said.

The blast is the first deadly attack against foreign tourists in Egypt for more than a year and comes as the tourism sector, a vital source of foreign currency revenue, recovers from a sharp drop in visitor numbers since the country’s 2011 uprising.

No immediate claim of responsibility was reported. Islamist extremists including some linked to Islamic State are active in Egypt and have targeted foreign visitors in the past.

At least nine Vietnamese tourists were injured, as well as the Egyptian driver, according to official statements.

The tourists were heading to a sound and light show at the pyramids, said Lan Le (41) who was in the bus but emerged unscathed.

“We were going to the sound and light show and then suddenly we heard a bomb. It was terrible, people screaming,” she told reporters at Al Haram hospital, where the injured were taken.

Egypt’s interior ministry said the bus was hit by an explosion from an improvised device hidden near a wall on Marioutiya street at around 6.15pm local time.

The interior ministry confirmed the death of two of the tourists, and the state prosecutor’s office later said a third had died. In total, 14 Vietnamese tourists had been travelling on the bus, it said.

Prime minister Mostafa Madbouly told a local television station from Al Haram hospital that the guide died from his injuries. “The bus deviated from the route secured by the security forces,” Mr Madbouly said.

Egypt has battled Islamic militants for years in the Sinai Peninsula in an insurgency that has occasionally spilled over to the mainland, hitting minority Christians or tourists.

The attack will prompt authorities to further tighten security around churches and associated facilities ahead of the New Year’s Eve celebrations and next month’s Christmas celebrations of the Coptic Orthodox Church, the dominant denomination among Egypt’s estimated 10 million Christians.

Over the past two years, militant attacks against Christians in Egypt – usually targeting churches or buses carrying pilgrims to remote desert monasteries – have killed more than a hundred people. – Reuters/AP