Eimear McBride, West Bank: ‘One of the most shocking experiences of my life’

The Irish novelist visited Palestine as part of Breaking the Silence, a campaign by Israeli ex-soldiers against the occupation 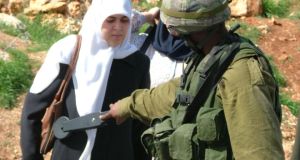 Occupied territory: a soldier searches a local, in a photograph from a Breaking the Silence exhibition 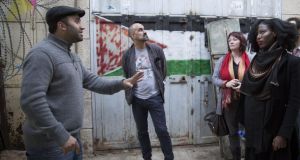 ‘Living in the West Bank is like being trapped in a cage. The walls of the cage are being wound ever tighter around the Palestinian people. It’s hard to see that kind of suffering and believe there is an end in sight.”

Eimear McBride pauses to take a deep breath before she continues her description of the people she met and places she visited during a recent seven-day trip to the West Bank.

“The terrible suffering and the despair and horrendous conditions people live in press very hard on them. But a lot of the Palestinian people I spoke to felt they would overcome in the end because their cause is a just one.”

McBride is one of a group of internationally known authors that Breaking the Silence, an Israeli military veterans’ group, has invited to visit the occupied territories ahead of the 50th anniversary of the Israeli occupation, next year. Over the past 12 years Breaking the Silence has campaigned to educate and inform Israelis about life in the occupied West Bank.

In February McBride joined the novelist and journalist Hari Kunzru, the photographer and writer Taiye Selasi and the Israeli writer Ala Hlehel on a week-long tour through the West Bank, where they met Palestinian and Israeli community organisers, activists, army veterans and academics.

“I wanted to challenge my own ignorance about the subject. I had some generalised ideas about the whys but realised I didn’t know specifically what was going on. It was a subject I felt very nervous of, that I had no right to have an opinion of it in a way.”

Over the next five months 25 other writers, including Colm Tóibín, Rachel Kushner, Dave Eggers and Jacqueline Woodson, will spend time in the West Bank before returning home to write about their experiences for a forthcoming book.

Mario Vargas Llosa, Ayelet Waldman and Michael Chabon, the writers who approached Breaking the Silence with the idea of creating a collection of essays to mark half a century of Israeli occupation since the Six Day War, in 1967, will also contribute to the book.

Yehuda Shaul, one of the founders of Breaking the Silence, says the aim of the project is to provide an international perspective on the Israeli occupation.

“In June 2017 we’re going to mark the 50th anniversary of Israelis in the West Bank, and we don’t want this to go unnoticed. It should be a day that reminds us of our responsibility to end the occupation.

“We want people with different backgrounds to see the reality on the ground,” says Shaul. “We hope this will be a new way of telling the story. Rather than just talking about things they will be smelling and touching the occupation – how it feels and what it looks like.”

“Our society has no idea”

Shaul set up Breaking the Silence in 2004 after serving in the Israeli army as a combat soldier and commander in the West Bank. “It was the realisation that people back home in Israel have no clue; our society has no idea. Our slogan was Let’s Bring Hebron to Tel Aviv.”

What began more than a decade ago as an exhibition of photographs and video testimonials from occupied zones has turned into an internationally recognised movement focused on “raising a mirror in front of our society to take moral and civil responsibility for what is being done in our names. The goal is very simple. We’re a bunch of veterans who believe our army should be an army of defence and not an army occupation. I think the occupation is destroying the morality of the IDF” – Israel Defence Forces – “and of Israeli society.”

The group says that it is criticising not the army but Israeli government policy. In a nation where the military is so highly respected, however, the group’s advocacy work has inevitably drawn criticism at home.

In December 2015 Breaking the Silence was banned from speaking in schools or to groups of soldiers by the Israeli education minister, Naftali Bennett, who said the group’s activism had led to “anti-Israel libel in the world”. “They have made it their mission to hurt their brothers – the ones who defend us all,” said Bennett. “We will not have lies and incitement in our schools.”

Breaking the Silence responded by saying the education minister was “sacrificing the Israeli education system on the altar of the occupation and the settlements”.

Lital Shemesh, a journalist and spokeswoman for the My Truth veterans’ organisation, says that Breaking the Silence is using former IDF soldiers “to push forward their political aspirations”.

“Those authors who were brought to the West Bank got the Breaking the Silence point of view, which is a one-sided point of view that is misleading the people. It’s a complex situation, and it’s simply wrong to present it as a black-and-white situation.”

McBride says that her “carefully organised” tour allowed her to speak with activists on both sides of the occupation. “We spoke with academics who had very in-depth knowledge, we spoke to soldiers and we went to visit Palestinians in their homes.”

She also met Bedouin women from near Jericho, in the Jordan Valley, who spoke about the frustration of being unable to find professional work despite their university-level qualifications.

“The occupation has devoured all the room in their lives, and there’s nowhere for them to go. There’s no place for them to have aspirations or dreams. They have to fight for the basics in life.”

Before travelling to the West Bank McBride felt unsure about whether an Irish novelist could play a role in building the international consciousness of the Israeli occupation.

“I felt like a very comfortable westerner who could get on the plane and go back to my life. But everyone I met there told me, ‘Tell people.’

“It was probably one of the most shocking experiences of my life, and I saw things I wish I’d never seen, heard things I don’t think I’ll ever forget. It’s important to try and impart some of that: the shame that the international community should feel at what is happening and what is being allowed to happen. That’s all I can do, but it’s something.”

*This article was amended on March 28 to change the location of where the Bedouin women live from the Negev desert to the Jordan Valley.