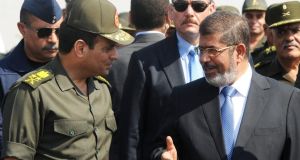 Gen Abdel Fattah al-Sisi, architect of the military intervention in Egypt’s worsening political crisis, was little known outside the army when he was appointed Mohamed Morsi’s defence minister last August – part of the Islamist leader’s deft consolidation of power.

Sisi, a career soldier, was head of military intelligence and the youngest member of the 19-strong Supreme Council of the Armed Forces. But despite coming from the security establishment he had a reputation for being sympathetic to the Muslim Brotherhood – the reason, many Egyptians assumed, Morsi chose him for the job. Sisi is said to be a religious man, and his wife, unusually, wears the full niqab (face veil).

Mohamed Beltagy, a senior Brotherhood figure, has described receiving a “brotherly” warning from the intelligence chief about an impending attack by regime thugs on demonstrators in Tahrir Square in what became known as the “battle of the camel” – one of the brutally defining moments of the revolution that overthrew Hosni Mubarak, in 2011.

But Sisi also attracted criticism for appearing to defend the behaviour of the armed forces in detaining and beating women protesters who were subjected to strip searches and “virginity tests” and threatened with prostitution charges.

Sisi, born in 1954, was a relative youngster in a military dominated by elderly officers with extensive privileges and a traditional view of their place in Egyptian political life. Field Marshal Hussein Tantawi, whom he replaced, was in his late 70s. Sisi reportedly shook like a leaf when Morsi told him to “behave like a man” and take the job, while Tantawi waited in the next room.

Sisi, an infantry officer, was trained at the UK Joint Command and Staff College and did a master’s degree at the US army’s War College in Pennsylvania.

Eyebrows were raised when he allowed Islamists to enter the Egyptian military’s officer training academy – when it had always insisted before that cadets were unimpeachably apolitical. Opposition supporters point out that as army intelligence chief, Sisi was privy to classified information about the Muslim Brotherhood and more radical Islamist groups, as well as links with Hamas.

Just days before Sisi was appointed, jihadis in Sinai attacked Egyptian border guards, killing 16 and humiliating the armed forces - underlining the dangerous gaps in security in the messy post-Mubarak transition.

Sisi, an infantry officer, was trained at the UK Joint Command and Staff College and did a masters degree at the US army’s War College in Pennsylvania.

He is said to have “experienced firsthand the aggravation of officers who watched huge amounts of money squandered on projects that lined the pockets of the high command but left the soldiers unable to fight effectively.”

He is also described as enjoying close relations with the US military as well as Saudi Arabia, where he served as a military attache. Inside the army, some critics reportedly believe he has been too soft on the Brotherhood.

Last December, the new Egyptian consititution gave the military greater autonomy than it had ever enjoyed before but relations with the Brotherhood worsened as public disenchantment with Morsi grew and the army polished its own PR. Sisi warned of intervention a week before the 30 June protests. Now he is at the centre of a high stakes struggle for the future of Egypt.