Hundreds clash with police at funeral of murdered Palestinian youth 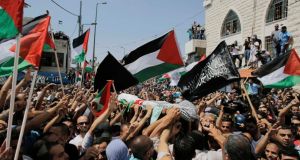 Palestinians carry the body of Mohammed Abu Khudair, the 16-year-old who was kidnapped and killed on Tuesday, during his funeral in an Arab suburb of Jerusalem yesterday. Photograph: Ammar Awad/Reuters

Militant rocket fire from Gaza continued yesterday, despite Egyptian efforts to broker a ceasefire to end a dangerous escalation in violence that has the potential to develop into a wider conflagration.

Cairo was engaged in intensive contacts with both sides after Israel moved tanks and artillery to the south, warning that it would launch a military offensive if the rocket fire did not end over the weekend.

Egypt has played a key mediation role ending similar flare- ups in the past. However, hostility between the current Egyptian leadership and Hamas rulers in Gaza has complicated current truce efforts.

“One possibility is that the fire stops and the quiet continues,” Israeli prime minister Binyamin Netanyahu said. “Otherwise, the fire will continue, and then reinforced troops in southern Israel will use force.”

“We are making a serious mistake,” he said. “While we talk about a ceasefire, Hamas continues to develop missiles that can reach Tel Aviv. All we are doing is postponing the problem and not finding a solution. This is not the answer we need to be giving Hamas. ”

As the ceasefire efforts continued, violence flared again in Jerusalem.

Hundreds of Palestinians took to the streets and clashed with police as the funeral took place of Mohammad Abu Khdair, the 16-year-old who was kidnapped and killed on Tuesday. The crowds joining the funeral procession chanted “to Jerusalem we are going, martyrs in millions,” and “rest, martyr, we will continue the struggle” as militants fired into the air.

Police blocked off streets around Jerusalem’s old city and prevented Muslim men under 50 from entering the compound of the al-Aqsa Mosque.

About 10,000 worshippers attended the prayers, in contrast to some 80,000 on the first Friday of Ramadan last year.

Relatives of the murdered Arab youth suspect Jewish settler extremists carried out the killing to avenge the murder of three Jewish teenagers in the West Bank last month, but Israeli police have yet to determine who was responsible.

This has been one of the most tense weeks in the region in many years, with killings, funerals and angry protests on both sides combined with rocket attacks and Israeli counter- strikes on the Gaza border.

“Everyone says the issues must be resolved through negotiations, but then the Europeans determine what the end result of these negotiations should be,” he said.

“This doesn’t happen with other disputes and is therefore discriminatory against Israel. What the Europeans do when they try to pre-empt the end results of the conflict is to essentially take themselves out of playing an important role in the conflict resolution, and this is a shame.”