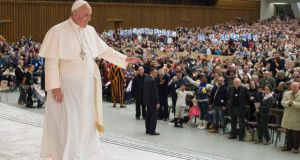 Pope Francis and other senior Christian and Muslim clerics have urged members of the ancient Christian communities of the Middle East to stay on in the region despite conflict and discrimination. Photograph: Reuters/Osservatore Romano

Ahead of Christmas, senior Christian and Muslim clerics have urged members of the ancient Christian communities of the Middle East, the cradle of the three Abrahamic faiths, to stay on in the region despite conflict and discrimination.

Pope Francis, Greek Orthodox patriarch of Antioch John X Yazigi, archbishop of Canterbury Justin Welby and al-Azhar imam Ahmad al-Tayeb, the leading jurist in Sunni Islam, expressed concern that the Christians could disappear from the Christian heartland if the rate of emigration continues.

Other Christian clerics have previously called upon western countries, which grant visas more easily to Christians than Muslims, to encourage Christians of the region to remain at home. Their pleas have fallen on deaf ears.

In Jesus’s birthplace, Bethlehem, Palestinian Christians now make up 15 per cent of the population of about 28,500, down from 40 per cent in 1998, due to an influx of Muslims from nearby villages, a low birth rate, and emigration driven by lack of economic opportunities and Israeli land expropriations and restrictions on trade and freedom of movement.

In West Bank enclaves administered by the secular Palestinian Authority, Christians number 124,000, about 8 per cent of the population, and in Hamas-dominated Gaza there are 1,333 Christians out of a population of 1.8 million.

Gaza’s Christians suffered Israel’s bombs and bullets alongside Muslims during last summer’s war. In Israel, there are 127,000 Palestinian Christians, about 10 per cent of the Palestinian population of the country.

After the 2003 US occupation of Iraq, that land’s one million-strong Christian community shrank by 50 per cent. Another 160,000 fled after the northern city of Mosul was seized by Islamic State (IS) fighters last June. Christians were killed if they did not convert to the radical IS cult, pay a tax, or leave.

Those who stayed on, paid, and remained true to their faith were banned from displaying the cross and organising activities outside their churches. Women were compelled to cover completely and remain at home.

Syrian Christians were not targeted in the conflict until 2012-13 when al-Qaeda’s Jabhat al-Nusra and IS entered that country. These groups imported radical foreign fighters, absorbed militants from rebel groups deemed “moderate” and seized territory.

IS’s conquest of the north-central city of Raqqa and of the province of Deir al-Zor dislodged tens of thousands of Christians while fighting in and around Aleppo, Syria’s largest city, decimated the Arab and Armenian Christian communities. The Jabhat occupied, emptied and looted the Christian town of Maaloula, where Aramaic, the language of Jesus, was still spoken, and wrecked two early Catholic and Orthodox convents.

Several thousand Christian refugees from Syria and Iraq fled to Jordan and Lebanon. Both are secular, multi-confessional countries where Christians live normally, participate in commercial and political life and welcome these refugees, who receive aid from the Catholic charity Caritas and local churches. Since many Iraqi and Syrian Christians identify deeply with their home countries, they seek to remain nearby so they can return to their cities once there is peace.

Until IS seized Mosul, the west showed little interest in the fate of Christians in Palestine, Iraq and Syria but if nothing is done to halt the migration of Christians in these countries, their numbers could be halved in coming years.

Egypt’s Copts, the largest Christian community in the region, face different challenges. For decades Copts have suffered marginalisation and discrimination, including the requirement to obtain special permits to build or repair churches.

Coptic communities, churches and individuals were targeted by assaults and hate crimes perpetrated by extremist Muslims during the regime of President Hosni Mubarak, toppled in 2011, and following the ousting of his successor, Mohammed Morsi, a Muslim Brotherhood stalwart, in 2013. Police rarely intervened.

1 Covid-19: Public urged to ‘stay at home’ as 1,025 further cases confirmed in State
2 Transmission of Covid-19 on flight into Ireland linked to 59 infections
3 Man (21) charged with breaking into a house armed with an axe
4 US election: ‘Donald Trump needs to go. White America got what they want’
5 Two hundred Irish retailers for all your online Christmas shopping
Real news has value SUBSCRIBE