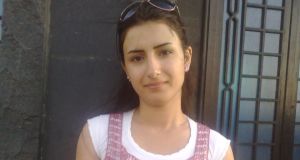 Nawwar Dlekan: ‘My parents have talked about the sea but I keep telling them, “Don’t do it. I will find a good way to bring you here”. A lot of our friends died in the sea’

“They want to move as soon as possible,” she says. “I keep telling them, ‘Don’t move in the sea’. They have only the sea to go to, but people are dying every day, so I can’t let them go this way.”

Nawwar Dlekan (25) is an Irish citizen who lived in Syria with her parents for most of her life. She was born here during a two-year period while her father studied for a master’s degree in UCD. A year ago, with Islamic State growing in strength and the Middle East in turmoil, she and her husband decided to flee to Ireland for a safer life.

Ever since, Ms Dlekan has been attempting to secure safe passage for her parents – who remain in the war-torn town of Daraya – to join her. “I want to find a legal or safe way to bring them here as soon as possible,” she says. “But I don’t know what to do.”

“They have talked about the sea but I keep telling them, ‘Don’t do it. I will find a good way to bring you here’. A lot of our friends died in the sea. There were 61 people in a small boat and they died with their children. It’s impossible to survive on the sea now.”

Ms Dlekan says she stayed behind in Syria for six months to finish her studies in media and journalism while her husband – who now has refugee status in Ireland – went ahead.

“Every time I go to my university I expected to die, because there are bombs and rockets all around. One time I was arrested outside the college and we were hearing bombs everywhere.

“We couldn’t get back to our homes. It was so difficult – but I thought I should prevail – that I should continue my studies anyway. That’s why I decided to stay. It was like a challenge.”

She says of the region where her parents reside: “War and Isis are there”. Both sides want control of the area and “they keep fighting”.

“Our house now is damaged,” she says. “There are no services in this area. There is no electricity and no water. All the glass in our house is broken because of the explosions of the sky rockets and bombs everywhere. It’s hard to survive in this area so I am so worried. The only way is to bring them here safely.”

Ms Dlekan says communicating with her parents – her father an English teacher and a poet, and her mother a lawyer – is “very difficult” and she struggles to stay in contact with them. “Every day I expect something bad but I am trying,” she says. “They have to come here as soon as possible but I don’t know what the options are.”

She says she has been in contact with the Irish Refugee Council, the Immigrant Council of Ireland, and the Department of Foreign Affairs for assistance but is “not hopeful” of a resolution.

“The Government is accepting refugees and since I am Irish I think I have the right to bring my family here,” she says. “It is a human situation. If they were in Syria, how could they survive there?

“My parents want to survive. They keep telling me it is okay because they don’t want me to worry, but I know because just a year ago I was there. I know how bad it must be now. But they have a hope that maybe some day they can come here.”