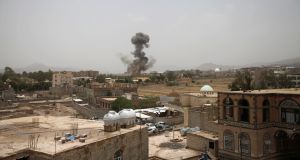 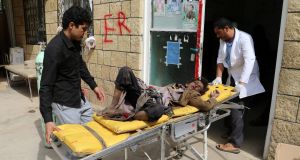 A doctor tends a boy injured by an airstrike in Sa’ada, Yemen, on Thursday. Photograph: Naif Rahma/Reuters

Children travelling on a bus were among dozens of people killed on Thursday by Saudi-led coalition air strikes in northern Yemen.

The vehicle was hit as it transported the children in Dahyan market in Saada province, according to the International Committee of the Red Cross. The ICRC said on Twitter that the hospital it supports in the area had received the bodies of 29 children, all aged under 15, and a further 48 wounded, most of them children.

Abdul-Ghani Nayeb, head of a health department in Saada, had earlier told Reuters that 43 people had been killed and 61 wounded in the strikes.

The attack will increase scrutiny on the tactics used by the Saudi-led coalition, which backs Yemen’s exiled government and is fighting Houthi rebels that control northern parts of the country.

The war has triggered what aid workers describe as the world’s worst man-made humanitarian disaster. The Saudi-led coalition has been widely criticised for the high civilian death toll as markets, hospitals and weddings have been hit by air strikes since it intervened in Yemen’s civil war in 2015.

More than 3,200 civilians were reportedly killed by coalition forces between March 2015 and August 2017, according to a UN human rights report.

The conflict has morphed into a proxy war, with Saudi Arabia and its allies accusing Iran of supporting the Houthis and supplying the rebels with sophisticated missiles that are fired at Saudi cities and oil infrastructure.

The coalition said its air strikes in Saada targeted “the militants” who were responsible for a missile attack on Jizan, a Saudi industrial city near the kingdom’s border with Yemen. The rebel movement said it fired a missile at Jizan on Wednesday. The missile was intercepted by Saudi Arabia’s defence systems, but fragments from the missile killed one man and wounded 11 others, the coalition said.

Col Turki al-Malki, a coalition spokesman, said Thursday’s air strikes in Saada “conformed to international and humanitarian laws”, according to a statement on the Saudi state news agency. The statement accused the Houthis of using children as human shields.

The Houthis have fired dozens of missiles at Riyadh and other Saudi cities since the coalition intervened in the conflict, most of which have been intercepted.

The rebels have vowed to step up their attacks and target Saudi oil facilities. An attack on a Saudi oil tanker last month caused Saudi Aramco, the state oil company, to suspend oil shipments through the Red Sea for about a week.

Fighting in the war escalated after the coalition launched a large offensive in June to retake the Hodeidah port. Almost 70 per cent of Yemen’s imports, including humanitarian aid, are shipped through Hodeidah and a nearby Red Sea port. The offensive stalled amid warnings from aid groups that the fighting would worsen the humanitarian catastrophe in a country where the conflict has already pushed more than 8m people to the brink of famine.

The coalition says Iranian missiles are smuggled through Hodeidah. Tehran denies that it arms the Houthis.

The UN has been struggling to find a diplomatic solution to end the fighting around the Red Sea port. – Copyright The Financial Times Limited 2018