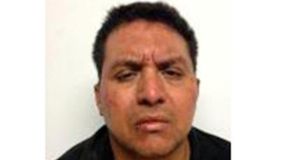 A handout photograph released during a news conference by the Mexican government of Miguel Angel Trevino. Trevino (40) known as Z-40, was captured early yesterday by Mexican army marines near the northern city of Nuevo Laredo on the US border, a government spokesman told reporters. Photograph: Secretaria de Gobernacion/Reuters

The Mexican government said last night it had captured the leader of the Zetas drug cartel, delivering a boost to president Enrique Pena Nieto in his fight against violent crime.

Miguel Angel Trevino (40) known as Z-40, was captured early yesterday by Mexican army marines near the northern city of Nuevo Laredo on the US border, a government spokesman told reporters.

Mr Pena Nieto came to office in December 2012 promising to boost security and restore stability to a country racked by bloodshed under his predecessor Felipe Calderon.

Mr Calderon staked his reputation on bringing the powerful drug gangs to heel, but bloodletting increased during his administration and more than 70,000 people have been killed in cartel-related violence since the start of 2007.

Trevino was captured by Mexican marines who intercepted a pick-up truck with $2 million in cash on a dirt road in the countryside outside Nuevo Laredo, which has long served as the Zetas’ base of operations.

The truck was halted by a marine helicopter and Trevino was taken into custody along with a bodyguard and an accountant and eight guns, government spokesman Eduardo Sanchez said.

Security experts said Trevino, who was born in Nuevo Laredo, took over the Zetas after the army shot dead the cartel’s former commander in October 2012. Although he lacked a military background, Trevino had a reputation for extreme violence.

Among the most shocking incidents pinned on the Zetas have been massacres of migrant workers, an arson attack on a Monterrey casino in 2011 that killed 52 and the dumping of 49 decapitated bodies near to the same city last year.

The government said Trevino was wanted for a litany of crimes including murder, torture, money laundering and ordering the kidnapping and execution of 265 migrants near the northern town of San Fernando. The bodies of dozens of murdered migrant workers were recovered there in both 2010 and 2011.

Along with two of his brothers, he was charged with laundering drug proceeds through horse racing last year.

US federal authorities accused Trevino and 13 others of pouring millions of dollars in proceeds from drug trafficking into the purchase, training and racing of American race horses across four US states.

The US State Department has offered a reward of up to $5 million for information leading to Trevino’s capture.