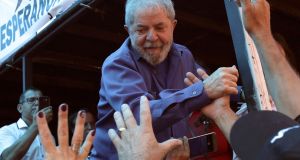 The campaign convoy of former president Luiz Inácio Lula da Silva was hit by gunfire on Tuesday night in the latest escalation of increasingly fraught political tensions in Brazil.

The attack took place in the state of Paraná on the latest leg of a campaign tour by Lula through southern states during which he has been confronted by political opponents throwing rocks and eggs and attempting to block his route.

A photograph posted by the Workers’ Party showed a bullet hole in one of the caravan’s buses with party activists saying a second vehicle was also hit. Lula was not with the convoy at the time and no one was injured.

Police have confirmed at least one bullet was fired.

In comments after the incident Lula said the violence against his campaign unleashed by right-wing opponents during the last week reminded him of the emergence of Nazism. Leaders across Brazil’s political spectrum denounced Tuesday’s attack. President Michel Temer said it would create “a climate of instability” in the country when what was needed was a period of calm.

The attack on Lula’s caravan came less than two weeks after the murder of Marielle Franco, a socialist member of Rio de Janeiro’s city council along with her driver. That crime remains unsolved.

It also came amid mounting political tensions ahead of next week’s expected ruling by Brazil’s supreme court on the former president’s petition for habeas corpus. If it denies Lula’s request he faces imminent detention after an appeals court earlier this week confirmed its own decision to sentence him to 12 years in prison for corruption.

Supporters and opponents of the former president have vowed to rally before the supreme court building in Brasília next week, raising the prospect of more clashes. Both sides have been using increasingly inflamed language as a final decision on Lula’s fate looms.

He denies any wrongdoing and says he is the victim of a political conspiracy designed to keep him from contesting October’s presidential election. He has spent recent months on the campaign trail even though, according to Brazil’s electoral law, he is barred from running following the failure of his appeal against his conviction in a kickback case involving a beachfront apartment.

Separately on Tuesday, supreme court justice Edson Fachin, who oversees the giant corruption investigation known as Car Wash, said he had received threats against the safety of members of his family. He did not say who he believed is behind these. Justice Fachin oversees cases in which members of Brazil’s political and business elite are being investigated in corruption scandals involving tens of billions of euro.

Relations between the 11 members of the court have become increasingly fraught in recent weeks as some of its members push to reverse a ruling made just 18 months ago that means those whose convictions have been upheld on appeal start serving their sentences immediately.