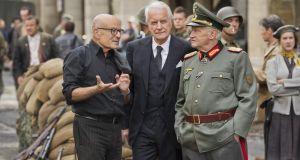 As Paris prepares to celebrate the 70th anniversary of its liberation from Nazi Germany on August 25th, the German film director Volker Schlöndorff has immortalised the story of the capital’s near destruction.

Hitler sent Gen Dietrich von Choltitz to Paris on August 7th with orders to defend the city or destroy it. As Allied and Free French forces advanced from Normandy and Provence towards Paris, the Germans mined 45 Paris bridges, train stations and landmarks, including the national assembly and senate, the Élysée Palace, foreign ministry, Les Invalides, the Eiffel Tower, Louvre and the Paris opera.

When Hitler had visited Paris in 1940, he ordered his architect, Albert Speer, to replicate its majesty in Berlin. By the summer of 1944, Berlin was in ruins. Hitler was determined that the “whore” of Paris be destroyed too, out of spite.

Raoul Nordling, the Swedish consul in occupied Paris, negotiated with von Choltitz for the liberation of more than 3,000 political prisoners, and for a truce between the Resistance and German troops, which held from August 19th to 23rd.


Distillation
Nordling was one of perhaps a dozen people who laboured over two weeks to dissuade von Choltitz from destroying Paris. Schlöndorff distills these discussions into one conversation in von Choltitz’s suite at the Hôtel Meurice, on the rue de Rivoli, on the eve of the liberation of Paris. His film is a highly successful adaptation of Cyril Gély’s 2011 play Diplomatie . Schlöndorff used the actors from the theatre version: André Dussolier as Nordling, and the Franco-Danish actor Niels Arestrup as von Choltitz.

“Why do you want to destroy this city, Monsieur le Gouverneur?” are Nordling’s first words when he slips into von Choltitz’s suite. An intellectual chess match ensues.

The audience knows Paris will not be destroyed, yet the suspense is genuine. How will Nordling deter a hard-baked Prussian general, the butcher of Rotterdam and Sebastopol, from carrying out orders?

Schlöndorff dedicated the film to the late US diplomat Richard Holbrooke, who negotiated the end of the war in Bosnia.

“I wanted to render homage to courage, perseverance, ruse and the success of the diplomat who is, for me, the true hero of the film,” Schlöndorff says.

Nordling shows that words can be the most powerful weapon. If von Choltitz destroys the city, Nordling tells him, his beloved wife Uberta and their three children will never see dawn over Paris. They will be branded with the swastika for the rest of their lives, as surely as the Jews have been branded with the star of David.

The motives for a good deed can be as mysterious as those for evil. Most historians believe von Choltitz simply wanted to escape hanging as a war criminal. Years later, he said he decided to disobey Hitler because destroying Paris would not have changed the outcome of the war.

If Paris is flattened, Nordling warns, reconciliation between France and Germany will be impossible for at least half a century.

“De Gaulle and Adenauer would not have been able to establish a dialogue after the war if Paris had been a field of ruins,” Schlöndorff explains. “The Allies would have razed Germany. There would have been no Franco-German couple to build Europe. ”

Two crude German officers arrive from Berlin with a list of the masterpieces Himmler wants pillaged from the Louvre. Then Nordling saves von Choltitz from an asthma attack.

The general confesses the real reason he must destroy Paris: Hitler’s Sippenhaft Law has turned his wife and children into hostages. If he does not obey orders, they will be murdered.

Nordling convinces von Choltitz that his family will be safe, amid the panic and confusion that will follow the German loss of Paris. When the operation is aborted and the camera lingers over beauty shots of Paris at dawn, there is scarcely a dry eye in the cinema.

The film opens with haunting scenes of the destruction of Warsaw, that same month of August 1944, to the music of Beethoven’s 7th symphony.

“When we’re celebrating the liberation of Paris this summer, we should remember the Poles,” says Jean-Pierre Azema, the second World War historian who presides over the 70th anniversary commemoration committee.