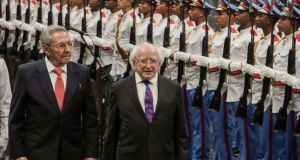 Michael D Higgins and Raul Castro had a ‘warm, long and comprehensive’ discussion on the first day of his three day visit. Photograph: Adalberto Roquedal/AFP/Getty Images

President Michael D Higgins held three hours of talks with his Cuban counterpart Raúl Castro on the opening day of his state visit to Cuba.

The discussion, described as “warm, long and comprehensive” by a spokesman for Mr Higgins, included exchanges on human rights, LGBT rights and civil society.

Mr Higgins is the first Irish president to visit Cuba and the first European head of state to travel to the Caribbean island since the signing last December of a political dialogue and co-operation agreement between the EU and Cuba, seen by both sides see as a milestone in their relationship.

Over more than three hours on Wednesday evening, first at a bilateral meeting and then at dinner at the Palacio de la Revolución, Mr Higgins and Mr Castro discussed a range of global and regional issues, as well as trade and exchanges in culture and academia.

Mr Higgins raised the implementation of the EU-Cuba deal, “including in relation to human rights, LGBT rights and civil society,” according to his spokesman. The EU regards the deal, which creates a framework for co-operation and discussion between the two sides, as a way of promoting European values and interests and playing a part in Cuba’s ongoing process of change.

According to the Irish side’s account of the meeting, Mr Castro asked Mr Higgins about his visits in the past week to Peru and Colombia. “They also discussed Cuba’s role in securing Colombia’s peace agreement and steps necessary for the implementation of the global agreements on sustainable development and climate change,” the spokesman added.

Before his meeting with the Cuban president, Mr Higgins laid a wreath at a monument in memory of José Martí, the poet and essayist who was a key figure in the Cuban war of independence against Spain.

Amhrán na bhFiann played as Mr Higgins arrived at the memorial on Plaza de la Revolución, a vast public square in central Havana. Behind Mr Higgins, on the facades of two government ministry buildings, were matching steel memorials to two heroes of the Cuban revolution: Che Guevara and Camilo Cienfuegos.

Mr Higgins’s visit takes place at a time of significant changes in Cuba, with the death of Fidel Castro last November, the coming to office of President Donald Trump in the United States and a decline in Cuba’s economic expansion all helping to produce acute political and economic uncertainty.

On Thursday Mr Higgins will tour Old Havana before launching the Cuban edition of Joseph O’Connor’s The Star of the Sea at the Havana Book Fair. Authors Colm Tóibín, Lisa McInerney, Michael McCaughan and Dermot Keogh are also in Havana this week for the fair.

Irish links with Cuba are a theme of Mr Higgins’s visit. The book fair is being held at the Morro Cabaña complex, overlooking the port of Havana, the fortification of which was overseen by Marshall Alejandro O’Reilly. Originally from Co Meath, Marshall O’Reilly was second in command of the Spanish army which took control of the island after it was handed over by the British, who had occupied it in 1763.

Later on Thursday, Mr Higgins will open an exhibition on the Irish in Latin America and attend a reception for Cuba’s Irish community.

This week’s visit is the culmination of a process that began in 1999, when Ireland and Cuba established diplomatic relations. Then minister for foreign affairs Micheál Martin visited Havana in 2009, with a return visit by his Cuban counterpart Bruno Rodriguez to Dublin the following year. The two countries signed an agreement on political dialogue in 2015, and a similar document on co-operation is due to be signed this week.