Guaidó defies threats of arrest and returns to Venezuela 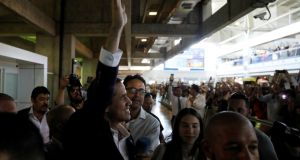 Venezuelan opposition leader Juan Guaido, who many nations have recognised as the country’s rightful interim ruler, greets supporters after his arrival at the Simon Bolivar International airport in Caracas, Venezuela on Monday. Photograph: Carlos Jasso/Reuters

Opposition leader Juan Guaidó successfully returned to Venezuela on Monday after a week-long tour of South American nations, defying threats from the chavista regime of embattled president Nicolás Maduro to arrest him for illegally leaving the country.

Mr Guaidó arrived at the main international airport near Caracas, tweeting to supporters shortly after noon that he had just passed immigration and was heading to join them at opposition rallies he had called for across the country.

“We entered Venezuela as free citizens, and nobody said anything to the contrary,” one tweet read.

Mr Guaidó, who declared himself interim president in January in an escalation of the opposition’s campaign to remove Mr Maduro from power, was forbidden by Venezuela’s supreme court from leaving the country.

Regime officials hinted that he would be hauled in for defying the travel ban handed down by the court, which is controlled by partisans of Mr Maduro’s populist chavista movement.

His unimpeded return in part reflects the diplomatic pressure applied to the Maduro regime not to move against its main rival. The European Union, the Trump administration and a host of regional governments had warned that any effort to detain Mr Guaidó on his return to Venezuela would mark a dangerous escalation of the political crisis gripping the country, with Washington having warned of an “immediate response” to any arrest.

Venezuelan Interim President Juan Guaido has announced his planned return to Venezuela. Any threats or acts against his safe return will be met with a strong and significant response from the United States and the international community.

Ambassadors for several European and Latin American states went to the airport to try to ensure the opposition leader would not be arrested on his arrival.

Mr Guaidó left Venezuela on February 22nd slipping into Colombia to take part in an effort to bring humanitarian aid from the city of Cúcuta into the crisis-stricken country, where hunger is a growing problem following the implosion of the country’s oil-dependent economy.

After that effort was blocked by troops loyal to Mr Maduro, he set off on a tour of regional states that are among the more than 50 nations to recognise him as his country’s legitimate ruler.

He claimed he was able to leave the country thanks to the support of dissident elements in the military, the loyalties of which have emerged as key to resolving the crisis.

While security forces did carry out Mr Maduro’s order to block the opposition aid effort several hundred troops have since deserted and Mr Guaidó has been able to operate with relative freedom from harassment within Venezuela.

This week’s rallies, allied with the insurgent president’s return, mark the opposition’s attempt to regain the initiative after the setback of failing to convince the military to disobey Mr Maduro’s orders and let in the humanitarian aid.

On his return Mr Guaidó hinted that on Tuesday public sector trade unions could announce a national strike. “We have to leave this regime which oppresses us inoperable,” he told supporters.

Public sector workers are among the last props of the Maduro regime, as those who obey chavismo’s calls to vote for it and attend pro-government rallies are given privileged access to scare food supplies.

There was no immediate reaction to his rival’s return from Mr Maduro, whose Twitter account instead showed a series of tweets celebrating carnival celebrations across the country.

But his foreign minister criticised US national security adviser John Bolton for justifying Washington’s determination to topple Mr Maduro while backing dictators in other parts of the world by citing the Monroe Doctrine, which many in Latin America view as a justification for US hegemony in the region.