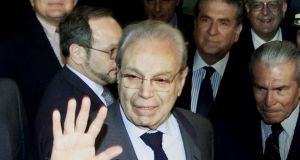 Javier Pérez de Cuéllar, the two-term United Nations secretary general who brokered a historic ceasefire between Iran and Iraq in 1988 and who in later life came out of retirement to help re-establish democracy in his Peruvian homeland, has died aged 100.

“Mr Pérez de Cuéllar’s life spanned not only a century but also the entire history of the United Nations, dating back to his participation in the first meeting of the General Assembly in 1946,” said Mr Guterres in a statement.

Mr Pérez de Cuéllar had death ends a long diplomatic career that brought him full-circle from his first posting as secretary at the Peruvian embassy in Paris in 1944 to his later job as Peru’s ambassador to France.

When he began his tenure as UN secretary-general on January 1st, 1982, he was a little-known figure who was a compromise candidate at a time when the United Nations was held in low esteem.

Once elected, he quickly made his mark.

His first step was to “shake the house” with a highly critical report in which he warned: “We are perilously near to a new international anarchy.”

With the 1982 Israeli invasion of Lebanon, and with conflicts raging in Afghanistan and Cambodia and between Iran and Iraq, he complained to the General Assembly that UN resolutions “are increasingly defied or ignored by those that feel themselves strong enough to do so”.

“The problem with the United Nations is that either it’s not used or misused by member countries,” he said in an interview at the end of his first year as UN secretary general.

During his decade as UN chief, Mr Pérez de Cuéllar would earn a reputation more for diligent, quiet diplomacy than charisma.

“Le ton fait la chanson,” he was fond of saying, meaning that melody is what makes the song and not the loudness of the singer.

“He has an amiable look about him that people mistake for through and through softness,” said an aide, who described him as tough and courageous.

Faced early in his first term with a threatened US cut-off of funds in the event of Israel’s ousting, he worked behind the scenes to stop Arab efforts to deprive the Jewish state of its General Assembly seat.

There was muted criticism from the Arab camp that he had given the Americans the right of way in the Middle East.

In dealing with human rights issues, he chose the path of “discreet diplomacy”.

He refrained from publicly rebuking Poland for refusing to allow his special representative into the country to investigate allegations of human rights violations during the Warsaw regime’s 1982 crackdown on the Solidarity trade union movement.

In July 1986, Mr Pérez de Cuéllarunderwent a quadruple coronary bypass operation, putting in question his availability for a second term.

From the outset, Mr Pérez de Cuéllarhad insisted that he would be a one-term secretary-general.

Upset with what he viewed as member states’ reluctance to pitch in to help the world body out of a financial crisis, he told the New York Times in September 1986: “I don’t see any reason why I should preside over the collapse of the organisation.”

But he did come back for a second term after a groundswell of support for his candidacy, including a conversation with President Ronald Reagan, who, in the words of the UN chief’s spokesman, expressed “his personal support for the secretary-general”.

“Just about all the western countries have told him they’d like to see him stay on,” a western diplomatic source said at the time.

“There is no visible alternative.”

Unlike his predecessor, Mr Waldheim, who was regarded as a workaholic and who spent long hours in his office, Mr Pérez de Cuéllar liked to get away from it all.

“He is very jealous of his own privacy,” a close aide said.

“When I can, I read everything but United Nations documents,” Mr Pérez de Cuéllar confided to a reporter.

Once on a flight to Moscow, an aide observed that “in the midst of it all, the secretary-general had time for splendid literature”.

After leaving the UN, Mr Pérez de Cuéllar made an unsuccessful bid for Peru’s presidency in 1995 against the authoritarian leader Alberto Fujimori, whose 10-year autocratic regime crumbled in November 2000 amid corruption scandals.

At the age of 80, Mr Pérez de Cuéllar emerged from retirement in Paris and returned to Peru to take on the mantle of foreign minister and cabinet chief for provisional president Valentin Paniagua. – AP