Venezuelan president Nicolas Maduro rejected the ultimatum he had been given by several EU countries and ruled out a new poll, while opposition leader Juan Guaido declared himself self-proclaimed acting head of state. Video: Reuters 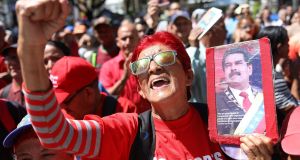 European powers have backed Juan Guaidó as Venezuela’s interim president in an effort to raise the pressure on Nicolás Maduro’s regime, even as divisions in the EU threaten efforts to forge a common stance.

Spain, France, Germany and the UK followed through on Monday on a January 26th pledge to recognise Mr Guaidó as interim leader if the government in Caracas failed to call fresh elections within eight days. Other European states including Denmark, Austria and Latvia followed suit, in a co-ordinated show of support for the opposition leader and head of Venezuela’s national assembly to organise fresh polls.

The EU had also given eight days for the Maduro government to announce elections, but has stopped short of saying it will recognise Mr Guaidó as interim president and has warned only of possible “further action” instead. The bloc’s position has been complicated by divisions within Italy’s governing coalition of the anti-establishment Five Star Movement and the far-right League over the crisis in Venezuela.

“Our position has been clear,” Mr Coveney said. “We agree with the joint statement that came from the EU last week that we are calling for free and fair presidential elections to allow people to make a democratic decision in Venezuela . . . we are watching with interest and I will brief my cabinet colleagues tomorrow.”

Ireland has traditionally taken the position that the State recognises states and not regimes.

Pedro Sánchez, Spain’s prime minister, said Madrid officially recognised Mr Guaidó as Venezuela’s president with the “clear horizon” of holding elections that “were free, democratic, with guarantees and without exclusions”.

“In the coming hours and days, I will contact the EU and European and Ibero-American governments that want to join forces with the cause of democracy in Venezuela to elaborate our position,” he said.

In response, the Maduro government issued a statement saying it would “fully revise its bilateral relations” with those EU countries that had recognised Mr Guaidó, reminding them that 200 years have passed since Venezuela “broke the colonial chains” that tied it to Europe. It said the EU nations had kowtowed to “a warlike policy led by the current United States government”.

Meanwhile, thousands of red-shirted government supporters gathered in central Caracas to mark the 27th anniversary of the day when Mr Maduro’s predecessor Hugo Chávez tried to stage a coup.

“I’m here to defend my brother Nícolas Maduro,” said 42-year-old Legna Serrano, saying the EU nations had revealed their “imperialist character” by recognising Mr Guaidó. “We won’t bow before them.”

In an interview with Spanish television on Sunday, Mr Maduro attacked Mr Sánchez and his plan to recognise Mr Guaidó.

“This will go worse for you than when [former prime minister José María] Aznar got involved in Iraq,” he said. “I hope you do not stain your hands with blood alongside Trump in the Venezuelan crisis.”

He tweeted: “Let’s hope this takes us closer to ending [the] humanitarian crisis.”

Mr Guaidó proclaimed himself Venezuela’s leader on January 23rd and received the immediate backing of the US and several Latin American countries. Since then, the opposition has been seeking international support and urging the country’s military to abandon Mr Maduro.

Eight European foreign ministers, including those of the UK, France, Germany, the Netherlands and Italy, will meet four Latin American counterparts in Uruguay’s capital Montevideo on Thursday for the first session of an international “contact group” aimed at resolving the Venezuelan crisis.

Federica Mogherini, EU foreign policy chief, has said the bloc will also consider adding to its targeted sanctions against the Maduro regime – although such a step would require unanimity. – Copyright The Financial Times Limited 2019