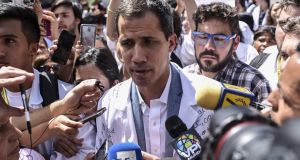 The European Parliament has recognised Venezuela’s opposition leader Juan Guaidó as de facto head of state, heightening pressure on Nicolás Maduro, amid condemnation over the arrest of foreign journalists reporting on the country’s turmoil.

MEPs voted 439 in favour to 104 against, with 88 abstentions, at a special session in Brussels to recognise Venezuelan congress head Mr Guaidó as interim leader. In a statement the parliament urged the bloc’s 28 governments to follow suit and declare Mr Guaidó “the only legitimate interim president” until there were “new free, transparent and credible presidential elections”.

“Parliament has spoken. For us, Mr Guaido is the president of Venezuela and we do hope that the European Union will find a united position on this,” Jeremy Hunt, the UK foreign secretary, told reporters on arrival at a two-day meeting of EU foreign ministers in Bucharest. The EU has imposed an arms embargo and sanctions on Venezuelan officials, but Mr Hunt wants the bloc to impose further targeted sanctions.

On Thursday the Spanish news agency EFE said three of its journalists – a Spanish reporter, a Colombian photographer and a Colombian TV producer – who had been detained on Wednesday were being released and deported. Two detained French journalists working for television channel TMC were also released on Thursday.

“We firmly believe that all journalists should be able to exercise their duties and responsibilities and rights in the exercise of their work,” said Federica Mogherini, the EU foreign policy chief, in Bucharest.

Erika Guevara-Rosas, Amnesty International’s Americas director, said: “The detention of journalists is a flagrant and deeply concerning attack on freedom of expression and the right to truth ... A free press is fundamental for the defence of human rights in any country in the world.”

Speaking on BBC radio, Mr Hunt said a humanitarian catastrophe was unfolding in the country, with citizens struggling to find scraps of food. “We are not considering sanctions against the whole country because there is a humanitarian situation and we wouldn’t want to make the situation even worse,” he said. “But targeted sanctions against the kleptocrats who have enriched themselves on the back of the rest of the population who are very poor, that is something I think can be effective.”

Key EU countries are prepared to recognise Mr Guaidó as the legitimate interim president of Venezuela if Mr Maduro refuses to call fresh elections by Sunday. But not every EU state has issued the ultimatum, and Russia is looking to see if these divisions can be prised open. Moscow has so far offered full-throated support for Mr Maduro. It is estimated to have invested €15 billion in Venezuela through refinancing of the country’s debt and through oil and arms deals.

Members of Mr Maduro’s administration have rejected and ridiculed the EU countries’ ultimatum, the end of which will be marked by a day of pro-opposition protests on Saturday.

“These men from the EU who think Venezuela is a colony have given us eight days to call elections and the deadline runs out on Saturday,” the powerful Socialist Party leader Diosdado Cabello told a rally in the northern city of Coro on Wednesday.

“How scary. How terribly scary!” Mr Cabello added mockingly. “Is the US going to get involved in an attack against Venezuela?”

Mr Maduro has accused US president Donald Trump and a “group of extremists around him” of plotting to topple him in order to seize Venezuela’s oil, and said he risked transforming the country into a new Vietnam.

Venezuela’s supreme court has imposed a travel ban and financial restrictions on Mr Guaidó, including freezing his bank accounts.

Mr Guaidó (35), a former student leader and head of Venezuela’s opposition-run national assembly, has been at the forefront of a renewed attempt to force Mr Maduro from power.

He said in an opinion piece for the New York Times on Wednesday that he had held “clandestine” meetings with the military to try to persuade them to withdraw their support for Mr Maduro. Protesters marched in Caracas on Wednesday calling for Mr Maduro to stand down.

In an interview to Spain’s El País newspaper, Mr Guaidó repeated an appeal to Venezuela’s armed forces to take his side. “I am convinced that at a certain moment ... the army will end up manifesting its discontent, and take this opportunity to stand on the side of the constitution. And not only because we propose an amnesty,” he said.

He added he believed there was no risk of a civil war “because 90 per cent of the population wants a change”, but there was a risk of violence from Mr Maduro’s government. – Guardian