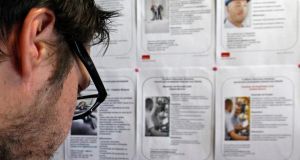 A senior student of the Castelo Branco City University of Technologies in Portugal looks up job announcements on a board after a presentation about job and traineeship opportunities June 12th, 2013. Photograph: Jose Manuel Ribeiro/Reuters

The unemployment rate across the euro zone hit a fresh record in May, as the recession continued to affect workers around the region and young people again suffered most.

The rise in unemployment was driven by increased joblessness in countries at the heart of the crisis, including Ireland, Spain and Italy. As the euro zone languishes in its longest-ever recession, the jobless total across the bloc rose by 67,000 in May to 19.2 million.

Seventeen members of the euro zone have higher unemployment rates than a year ago, while 10 have lower rates.

Forecasts were higher
Economists had forecast an even higher rate of 12.3 per cent for May in a Reuters poll. They warned the jobless crisis could get worse before it gets better. “An end to the euro zone labour market downturn is not yet imminent. Indeed, the employment expectations indices from the European commission’s business survey are still at levels consistent with further increases in unemployment. However, with the recession across the euro zone petering out, the peak in unemployment should not be too far away either,” said Martin van Vliet at ING Financial Markets.

Cyprus, which was dragged into a bailout crisis this year, suffered the biggest annual rise – from 11.4 per cent in May 2012 to 16.3 per cent this May. And Slovenia, which is fighting to avoid a bailout, has seen its jobless rate increase from 8.6 per cent a year ago to 11.2 per cent.– (Guardian service)