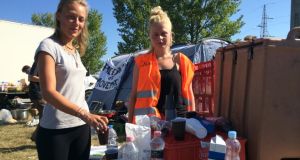 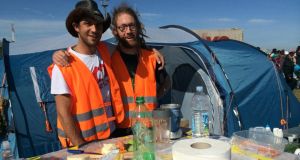 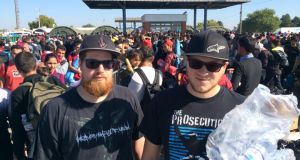 Ilias and Basti handing out water as part of a group of about 20 volunteers from Regensburg, Germany. Photograph: Daniel McLaughlin

Louisa and Joana were enjoying the sun, sea and beauty of Croatia when they decided to scrap it all and spend the final days of their holidays doing something radically different.

“It’s hard to enjoy yourself when something so bad is happening so close,” said Louisa (20), who is from Hamburg, as Berliner Joana offered tea, coffee and hot chocolate to some of the hundreds of migrants at a transit camp in eastern Croatia.

They had come to the Opatovac camp, through which thousands of asylum seekers have passed in recent days, after lending a hand across the nearby Serbian border at Sid, and at Bregana on the Croatia-Slovenia frontier.

The women, who plan to return to Germany this weekend, are travelling light.

They left most of their belongings in Zagreb, the Croatian capital, and borrowed equipment from other young traveller-volunteers to set up their little help point at Opatovac.

They are among dozens of young volunteers from across Europe who have created an international and multilingual help camp outside the state-run Opatovac facility, alongside the larger tents of major NGOs such as the Red Cross and Médecins Sans Frontières.

Many other similarly inspired young Europeans have rallied to trouble spots and bottlenecks on the migrants’ long trek through the Balkans towards western Europe.

They offer everything from food, water and medical aid to help setting up wifi hotspots and places to recharge mobile phones.

Last week at Roszke on the Serbia-Hungary border, several volunteers slept out on a closed motorway with hundreds of refugees, after clashes between a small group of stone- throwers and Hungarian riot police, who replied with tear gas and water cannon.

When Serbian buses arrived the next day to ferry them to the Croatian border, the volunteers promised to follow behind to make sure they did not take the migrants back south to Macedonia, or to a detention camp.

At Opatovac, only the staff of major NGOs are allowed inside the wire perimeter fence.

Next to the drinks station run by Louisa and Joana, Fabian and James from Switzerland were yesterday cooking soup for migrants on a portable stove and whizzing up fruit smoothies in a blender.

“We drove over with a car and trailer from Zurich,” said Fabian. “We managed to raise about 4,000 Swiss francs [€3,680] from friends and we brought food, clothes, medicine and other things from Switzerland.

“I saw on TV what was happening with the refugees,” he added. “I had time after finishing my engineering studies and before starting work, and so I decided to use the opportunity to help.”

Hundreds of migrants from the war zones and failing states of the Middle East, Asia and Africa continued to arrive at Opatovac yesterday, many walking along a new route from Serbia through a border village called Bapska.

Croatian police organised the new arrivals into lines at the camp, where they had to wait several hours to pass through the gates and register before being allowed to board buses for their onward journey to the border with Hungary.

Alongside workers from the Red Cross, UN refugee agency (UNHCR) and other major international aid groups, volunteers distributed fruit and water, some wearing bright vests stating where they were from: “Austria”, “Czech team” etc.

“Volunteers are often the first people there on the ground to help, and we can only support and welcome their engagement,” said Gruenert, the UN agency’s senior emergency co-ordinator in Croatia.

“This is civil society organising itself to help, and we are very happy to see that.”

Prominent among the volunteers, and very busy organising yesterday, were two big men clad in black and wearing sunglasses and ginger beards.

Basti and Ilias were among a group of 20 volunteers from Regensburg, Germany, who were working flat out to operate one mobile kitchen and get another up and running after it had been delayed overnight at the Serbia-Croatia border.

“We saw how it was a disaster at Roszke last week, how groups like the Red Cross and UNHCR had too much work to do and too little organisation.

“So we decided to get involved,” said Basti, as friends cooked rice, potatoes and soup for the migrants.

“This is what we can do,” added Fabian from Switzerland. “We can’t help solve the problems in Syria, or in countries where there are huge refugee camps. But we can help here - and it’s up to politicians to fix the rest.”