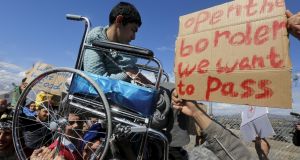 Stranded refugees and migrants lift a wheelchair-bound boy during a protest next to the Greek-Macedonian border fence near the Greek village of Idomeni. Photograph: Yannis Behraki/Reuters

Wheelchair-bound Zhino Hasan (17) sat silently and alone for most of Friday in front of a closed border gate, hoping that Macedonia would relent and allow her and her family to resume their northward trek through the Balkans to Germany.

Her father, Sarkawt, wheeled her there at daybreak on Friday, hoping to get a headstart in the queue whenever the border Greece shares with Macedonia in the small community of Idomeni reopens.

The Hasan family, Iraqi Kurds from Kirkuk, are among at least 20,000 refugees and migrants trapped in Greece following successive border shutdowns along the Balkan route used by refugees to reach wealthier European nations.

“We want to get to Germany,” said Sarkawt Hasan. They arrived in Greece through the island of Lesbos eight days ago.

Strapped in and wearing no shoes, Ms Hasan is handicapped and unable to speak. When it started raining, her family covered her with plastic bags.

Hunched to one side in a black fleece hoodie covering her face, she sat in front of a sliding iron gate topped with razor wire. Occasionally, her father would call across the border asking Macedonian police to open the gate, but did not get a response.

“I am begging (United Nations’ Secretary-General) Ban Ki-Moon for help, I’m begging the EU to open the borders,” he said. “My daughter needs help. I don’t know what to do.”

Macedonia and other countries along the Balkan route have agreed to limit the flow of migrants to about 580 per day per country, Slovenian police said on Friday, one day after a meeting on the crisis hosted by Austria.

Greece, furious over not being invited to the talks in Vienna, asked its passenger ferry companies and travel agencies on Friday to cut back on bringing migrants and refugees from frontline islands to the Greek mainland.

Macedonia has previously said it will only now allow Syrian and Iraqi nationals to cross its border from Greece.

From its northern frontier with Macedonia to its port of Piraeus in the south, Greece was inundated with refugees and migrants after border shutdowns cascaded through the Balkans, stranding at least 20,000 in the country.

At Idomeni, a small community on the border with Macedonia, witnesses saw hundreds of families walking towards the frontier to join an estimated 3,000 more at a makeshift camp where many pitched tents in a field close to razor wire fence.

More than 500 km further south, hundreds of people were temporarily accommodated at a disused airport west of Athens. Sleeping mats were strewn across the terminal among biscuit wrappers as many women sat on the floor, some weeping.

“Planes bombed our homes, it was dangerous to stay there,” said mother of three Rajiya Zara who is nine months pregnant. “I’m afraid for my children.”

Between 300 and 400 people refused to stay at the airport, and took off on their own. “Help Us,” a large piece of paper held by one said. “We are human, open the borders”, read another, scrawled on a sleeping mat.

We didn’t start it

Athens on Thursday recalled its ambassador to Austria in anger over the border closures and has threatened to block European Union decision-making unless the bloc comes up with concerted action to deal with the crisis.

In the latest measure to slow the northward movement of migrants, the police chiefs of Slovenia, Austria, Macedonia, Serbia and Croatia agreed to limit the flow to about 580 per day per country, Slovenian police said on Friday.

The police chiefs are “obliged to limit daily transit through Western Balkans countries to a number which would enable a control of every migrant according to Schengen rules,” the police said.

Austria had earlier in the week hosted a summit of Balkan nations on how to regulate the migrant flows, but did not invite Athens. “Greece is being attacked by short-sighted countries, as if we were bombing Syria or created the refugee flows,” said Nikos Kotzias, Greece’s foreign minister.

Macedonia, to the immediate north, is accepting only Iraqis and Syrians, witnesses say, with Afghans being turned back. Many of those who travelled the 550 km journey north only to be turned away sat in the stinking and overcrowded airport terminal on Friday, pondering their fate.

“I want to go to Germany,” said 18-year-old Nadershah Ahmedi, a student from Afghanistan. “When we came to Greece we heard the borders to Macedonia are closed for Afghans. Why can Syrians and Iraqis pass but not us?”