Welcome to ‘The Grand Budapest Hotel’: an offscreen department store 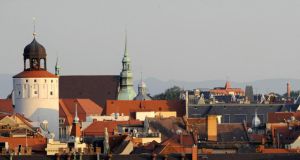 Tucked away in the easternmost corner of Saxony, Görlitz is filled with perfect examples of every major architectural movement of the last 500 years. Photograph: Norbert Millauer/AFP/Getty Images)

My train was delayed getting into Görlitz. Late for an appointment, I hopped into a taxi to take me into town.

A decade on I still remember that short journey, in particular how my mouth opened in wonder at what I saw through the taxi window. By the time I arrived at my destination, my jaw was, quite literally, hanging in awe at the immaculate Jugendstil apartment blocks before me. From gold leaf inscriptions over the doors to the traditional double windows, every detail was perfect – right up to the decorative turrets on the corner houses. The city before me, I realised in my daze, was like a full-colour, fully intact version of the pre-war Berlin that now exists only in monochrome photographs.

Tucked away in the easternmost corner of Saxony, Görlitz is filled with perfect examples of every major architectural movement of the last 500 years, the highlight of which is the art deco department store from 1912. Walking through the doors and gazing up at the stained-glass atrium roof, it was like stepping out of a time machine – or on to a film set.


Resort town
Anyone who has seen The Grand Budapest Hotel film has seen Görlitz. Director Wes Anderson set his film in the fictional Republic of Zubrowka (named after the popular Polish vodka). He settled on Görlitz to fill in for the resort town. Starring alongside Ralph Fiennes, Tilda Swinton and others is the century-old department store as the grand hotel. The hit Hollywood film is the latest, welcome shot in the arm for a town that, for decades, was dealt a bad hand by history.

From the middle ages on, Görlitz was a prosperous trading town thanks to the Via Regia (King’s Road) that ran west out to Frankfurt and Mainz. It was here that traders from the east offloaded their silk and spices before heading home, leaving Görlitz merchants to sell on the luxury goods to the rest of Europe – investing their handsome profits in handsome buildings to advertise their prosperity.

Though spared allied bombs, Görlitz was devastated in 1945 when the river Neisse through town became Germany’s easternmost border. The half of Görlitz east of the river was lopped off to become the Polish town of Zgorzelec and a once-prosperous town became a provincial backwater. For decades, this obscurity spared Görlitz the attention of architects who imposed their radical socialist signature on other East German cities. Plans to demolish the crumbling facades in 1989, thankfully, came to nothing when history intervened and the Berlin Wall fell. Work began on renovating 4,000 buildings to recreate Germany’s largest historical cityscape that is now a Unesco world heritage site.

Anonymous benefactor
In a real-life Hollywood twist, the cash-strapped city received a one-million-mark donation to its renovation fund in the spring of 1995. Every year since then, the donation has continued – now €500,000 – with just two conditions: the money is used to renovate historical buildings and the donor’s identity remains a secret, known only to a local lawyer.

Though challenges remain, the last decade has been good to Görlitz. EU enlargement in 2004 reopened the river Neisse border and restored links to Zgorzelec, the Polish half of the city. And, while most eastern cities are losing people to seek work elsewhere, the population of Görlitz is growing. The city is unique in Germany as adoptive home to a growing army of German pensioners, attracted by the lower cost of living and the Silesian region many remember from their childhood.

Renate Eusterbrock was born in Breslau, now Wroclaw in Poland, and fled with her family after the war to West Germany. One day the artist heard about pensioners moving to Görlitz and decided to visit.


Idyllic home
“I walked into the butchers here and got a smell I hadn’t smelled since my childhood,” said Ms Eusterbrock, an energetic octogenarian, whose round, black glasses and auburn bob make her look decades younger. “Breslau isn’t far away, I felt at home again and decided to stay.”

Wes Anderson’s film crew didn’t stay and the art deco department store sits vacant once more, waiting for a new owner to transform it into a real-life Grand Budapest Hotel. For now, its new senior residents have transformed the jewel that is Görlitz into Germany’s answer to Miami.