‘We want our islands back’ – Greeks protest against asylum seeker burden

As 21,500 migrants crowd into packed camps on Lesbos, frustration at EU mounts 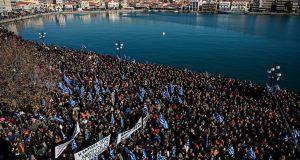 Residents of the island of Lesbos demonstrate against migrant camps, at the port of Mytilene, January 22nd. Photograph: Aris Messinis/ AFP/Getty

“We want our lives back. We want our islands back.” So reads the sign hung above the town hall in the centre of Mytilene, the capital of the Greek island of Lesbos.

There are more than 21,500 asylum seekers on Lesbos – spelled locally as Lesvos – and the sense of frustration from all sides is palpable. The majority live in the Moria refugee camp. A former military base, it was supposed to accommodate 2,840 people but now has a population of about 19,300.

On January 22nd more than 9,000 local residents gathered on the streets of Mytilene, protesting at what they perceive as a failure of the Greek and European governments to alleviate the pressure on Lesbos, Chios and Samos – the Greek islands experiencing the greatest number of arrivals.

The town’s waterfront, decorated with Greek flags, was packed. “EU Take UR Share” read one sign carried by Lampriani Matthaiou (42), who was born and raised on Lesbos. She was keen to clarify that her problem was with policy, not people.

“The EU needs to support us morally. We have put up with the situation for so long now – it’s unbearable. We don’t need money, we want them to take the refugees to where they want to go. Greece is very weak, we cannot support everybody and it’s not nice in 2020 for people and small kids to live in these bad conditions,” she told The Irish Times.

Greek’s centre-right government, New Democracy, was elected last July on promises to manage the migration situation, but it has faced criticism by islanders who are still waiting for results. The North Aegean regional governor, Kostas Moutzouris, told the crowd at the protest in Mytilene that there was a “pact of silence” among European states and the Greek government.

The minister for migration and asylum, Notis Mitarakis, said the “anxiety and indignation” of the islanders was justified and vowed to find a solution to stem the flow of arrivals to Greece and decongest the islands. Last Thursday the government announced plans to build a 2.7km floating barrier off the island of Lesbos to be completed by the end of April. The administration said the barrier would help to deter and reduce arrivals to the island.

Maria Albero from Lesvos Solidarity, an NGO started by locals to support asylum seekers on Lesbos, said that while they didn’t agree with the recent protests, they sympathised. “We understand that the local community feel abandoned by the European Union, ” she said. “Moria is out of control, all the services on the island are overwhelmed from the garbage collectors to the hospital. They need to open the islands and redistribute the migrants.”

It is not only the islanders who feel overlooked by the EU. Last week a crowd of more than 200 women living in Moria, who say they feel unsafe there, also protested in Mytilene, holding signs saying: “Isn’t Moria EU?”

Moria, the refugee camp synonymous with overcrowding, is a 15-minute drive from Mytilene. Most people now live outside of the official camp boundaries. Rubbish accumulates on the side of the camp, and more tents appear every week. Children shout “hello” in the myriad of different European languages they have learned in this camp on the periphery of Europe.

Charities and NGOs are working daily to improve conditions for the thousands of residents but the population keeps growing.

“We thought that when we went to Europe it would be very beautiful, we couldn’t imagine this. We thought we’d have a better life,” said Mohammed Rezvani, who is living in the camp with his wife and two children.

Rezvani (45) from Bamiyan, Afghanistan, sat outside his tent overlooking the densely packed hillside of the camp. “It’s not hygienic here and everybody gets sick. You can see how much garbage there is and the weather is very cold.”

Dr Apostolos Veizis, director of medical operational support for Médecins Sans Frontières (MSF) in Greece, said that the camp was a direct result of EU policies. “The situation in Moria is reflecting the political choice of the European Union,” he said. “Greece never had the capacity both in the reception and the asylum services, which the Greek authorities and the European Union knew very well from the beginning.”

MSF operates a clinic at the foot of the camp. It has consistently spoken out against what it says are inhumane conditions created in part by the EU-Turkey deal of 2016, which requires all asylum seekers to have their applications processed on the Greek islands.

“The European Union and member states are presenting the situation as a humanitarian crisis but this is a policy-made crisis and a management crisis,” he said. “Before we even talk of solidarity, it’s important that EU leaders radically rethink their policies for safe and legal ways for people to seek refuge in Europe. We need to talk to our governments and tell them not in our names: this is happening under the eyes of all European citizens.”

In spite of Moria’s poor conditions, Golsha (49), a cousin of Rezvani and from the same area of Afghanistan, said she was grateful. “I want to say that we know we weren’t invited here. We are very thankful to Europe. We know that they are trying to help even if it’s really bad in Moria. I would be very grateful for a life here – I cannot go home.”