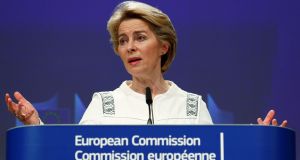 European Commission president Ursula von der Leyen: “The Finnish proposal is not enough. I am concerned at the severe cuts in this proposal compared to the commission proposal.” Photograph: Francois Lenoir/Reuters

The ambitious strategic objectives for the EU already agreed by its leaders would be threatened unless they committed to come up with the cash to implement them, European Commission president Ursula Von der Leyen said on Wednesday.

Speaking to journalists after the first meeting of the new commission, Ms Von der Leyen tore into EU budget 2021-27 proposals from the Finnish EU presidency, which leaders will discuss, but are unlikely to agree, at the summit in Brussels next week.

The Finnish “negotiating box”, which puts its suggested, tentative figures on the budget compromise being discussed by member states, cuts commission overall spending proposals by up to €50 billion in a bid to placate the big contributor countries.

The difficult talks on the next five-year budget are expected to run well into next year, with commission officials warning that failure to agree – a unanimous vote is required – could jeopardise funding to programmes due to start in 2021.

“The Finnish proposal is not enough,” she said. “I am concerned at the severe cuts in this proposal compared to the commission proposal.”

If the leaders want to see the strategic programmes already agreed by member states – “If we do want to do all of this, we have to look each other in the eyes and discuss how it will be done”.

She also urged leaders to take seriously proposals only touched on in passing in the “box” for new EU Europe-wide taxes, known as “own resources”, not popular with many member states, specifically taxes on single-use plastics and emissions trading schemes.

Ms Von der Leyen also pledged to bring forward her commission’s much- vaunted climate change Green Deal package as soon as next week, insisting that from the start of this week’s COP25 climate summit in Madrid, the EU was already showing that it was the global front-runner on the issue. She quoted UN secretary general António Guterres at the conference warning that “it is almost too late”.

The commission president promised new legislation, a climate law, which would make the process towards the target of carbon neutrality by 2050 “irreversible”. And she pledged the transition fund being established to assist member states, like Poland, still most heavily dependent on carbon fuels would be of the order of €100 billion.

Pledging EU rescue teams and €50 million in immediate assistance to Albanian earthquake victims, Ms Von der Leyen reiterated her position that the refusal at the last summit to begin the accession process with both Albania and North Macedonia was a “strategic mistake”.

She said the concerns felt by French president Emmanuel Macron over reforming the accession process could be met in parallel with accession talks with the two countries. “We are at their sides,” she said.

Ms Von der Leyen, who is heading this week on her first foreign trip to Addis Ababa, said that she wanted to emphasise her and the commission’s commitment to Africa by a visit to the headquarters of the African Union.