Vaccine scepticism among medics sparks alarm in Europe and US 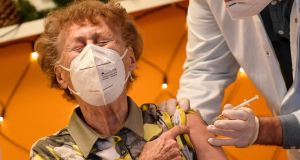 A resident of a nursing home getting the BioNTech-Pfizer Covid-19 vaccine in Cologne, Germany. Photograph: AP Photo/Martin Meissner

Signs that a relatively high number of healthcare workers are unwilling to receive the coronavirus vaccine in some parts of Europe and the US have alarmed politicians and health experts, as countries struggle to contain a surge in infections and carry out mass vaccination.

A poll released in mid-December caused surprise in Germany – the country that has been at the forefront of the race for a vaccine with biotech company BioNTech – by showing that half of surveyed nurses did not want to be vaccinated, along with a quarter of doctors.

Those worries came back to the fore this week when the head of one German state said only a third of healthcare workers in his state were willing to get the jab.

A high degree of reluctance among medical staff has also been observed in other parts of Europe and in the US. In France 76 per cent of senior care home staff said they did not want to get vaccinated, according to a poll of 2,000 such workers carried out last month.

In Austria only half of the staff of care facilities in the region of Vorarlberg said they were willing to be inoculated, according to Austria’s public broadcaster.

The Italian Federation of Medical Professional Associations said about 100 doctors were unwilling to receive the immunisation across the country.

In the US a survey released last month by the Kaiser Family Foundation health think-tank found that 29 per cent of US healthcare workers would probably or definitely not get a vaccine, a slightly higher proportion than in the overall population (27 per cent).

Anecdotal evidence from the first weeks of rollout in the US suggests staff at care homes are particularly hesitant to be vaccinated.

Mike DeWine, the governor of Ohio, said recently he was “troubled” by the relatively low numbers of nursing home workers taking the vaccine, with around 60 per cent of nursing home staff having declined the shot.

In some nursing homes, he said, only 20 per cent of medics received a jab, while in others it was as high as 80 per cent. But he said data showed regular flu vaccines among medics was “unfortunately very, very below average”.

“Promoting vaccination of healthcare workers is very important. We work in an environment full of vulnerable people, it is our responsibility to get it,” said Uwe Janssens, the author of the German survey released last month. “If people see healthcare workers are unconvinced, how will that affect our society?”

Dr Janssens, general secretary of the German Society for Internal Intensive Care and Emergency Medicine, decided to conduct his survey after being shocked to hear several nurses express concerns over the new mRNA technology, used by the two EU-approved vaccines BioNTech-Pfizer and Moderna.

Among the 2,305 survey respondents, many feared long-term side effects, while female nursing staff expressed concerns over their ability to get pregnant. Many interviewed, he said, appeared to have seen anti-vaccination videos spread online.

Vaccine scepticism may already be affecting healthcare in parts of Germany. On Tuesday, Bodo Ramelow, head of the state of Thuringia, cited one clinic in the city of Eisenach that stopped taking Covid-19 patients – not because it was short on hospital beds, but because 100 employees were themselves sick or in quarantine.

“This leads to a real problem because we want to make sure that these people, who work so very close to the virus, have the highest protection,” Mr Ramelow told MDR television. “I plead to everyone to go get it.”

Germany, which is struggling to contain a second surge in Covid-19 infections, has imposed no legal requirement to take the vaccine, though some lawyers specialising in labour rights say medics could potentially face dismissal should their employers argue they were posing a health risk to patients.

In Italy authorities are investigating 13 doctors accused of anti-vaccine propaganda or playing down the severity of the virus.

“I am perplexed when I hear of fellow doctors or nurses reluctant to get the vaccine,” said Pierpaolo Sileri, Italy’s deputy health minister. “I can understand it regarding a member of the public who perhaps does not have the scientific understanding, but frankly, I think that those doctors and nurses, if they still have doubts after seeing everything that’s happened, are probably in the wrong job.”

Markus Söder, head of Germany’s state of Bavaria, said on Tuesday that a public campaign was needed “to drum up support, not only for more vaccines, but also willingness to accept this vaccine. This will be a subject of tense debate.”

The latest polls on vaccine acceptance, however, suggest that the public is not growing more confident. In the spring, 79 per cent of respondents to Germany’s University of Erfurt survey were willing to be vaccinated, while in September that number had dropped to 56 per cent. Last month, a YouGov poll suggested 32 per cent of Germans were immediately willing to be inoculated, while another 33 per cent wanted to see how the first round of vaccination went.

In France, amid a slow rollout of the vaccination campaign, only 40 per cent of French people polled by Ipsos last week said they planned to be vaccinated, down from 54 per cent in October and 59 per cent in August.

Despite the wariness, Dr Janssens said he believed the tide would turn among medics after the first round. “I am hopeful then others will follow. But it’s a very important signal that we need to give these people information now.” – Copyright The Financial Times Limited 2021