US intelligence ‘spied on Julian Assange around the clock’ 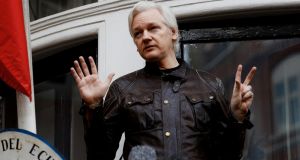 Julian Assange on the balcony of the Ecuadorian embassy in London, May 2017. Photograph: Peter Nicholls/File Photo/Reuters

US intelligence spied on Julian Assange around the clock inside his Ecuadorian embassy refuge in London, a German newspaper has claimed.

On Monday the Süddeutsche Zeitung said it had evidence of close contact between US intelligence agencies and Undercover Global SL, a Spanish firm contracted to provide embassy security services.

Mr Assange spent six years, nine months and 24 days in the embassy until his diplomatic and asylum status were revoked and he was arrested in April 2019.

For most of Mr Assange’s time in the embassy, UC Global was responsible for security.

The firm began life doing security work for yachts, cargo ships and factories before securing the contract to protect the daughter of Ecuador’s then president Rafael Correa.

From 2017 on, company staff remember how their boss and firm owner David Morales, a former elite soldier, made regular trips to the US, during which he made demands of them.

In June 2017 a former employee claimed Mr Morales demanded he be given access to the live-stream feed from the embassy cameras.

Six months later Mr Morales reportedly insisted all cameras in the embassy be replaced with new ones that recorded sound, but that technicians should deny their sound capabilities if asked. Additional hidden microphones were reportedly placed in the conference room fire extinguisher and in the women’s toilets, where Mr Assange held confidential conversations.

The technician said he was asked to take pictures of the embassy to establish its layout, with a view to adding further microphones.

In all internal company communication, the source said Mr Assange was referred to as “the guest” while the embassy was “the hotel”.

While in the US in 2017, Mr Morales asked an employee to activate the “hotel” computer server and, two days later, he asked for the server password. Three months later, he asked if his employees knew the embassy wifi password.

Challenged by his staff, he reportedly said he needed the information for “our friends in the USA” and the “agency of Stars and Stripes”. A former employee is quoted in the files as saying that Mr Morales confided in him that US intelligence was behind the demands.

US intelligence agencies declined to comment on the allegations, while UC Global denied the claims put to it by the Süddeutsche Zeitung. Mr Morales, the newspaper added, did not respond to a request for comment.

Two unnamed Ecuadorian officials told the newspaper the “security firm’s task was to guarantee the security of the embassy and never to damage any asylum seeker”.

The claims, including emails from former company employees, are part of a dossier to be presented in London by Mr Assange’s legal team about his almost seven years in a 35sq m room. His extradition hearing got under way at the Old Bailey on Monday.

Mr Assange’s partner, Stella Moris, with whom he has two children, says she noticed at least 10 cameras in the embassy, with one “every five steps”. When she spent nights with him, the couple erected a tent indoors for privacy.

“What happened in the embassy,” she said, “was weird.”