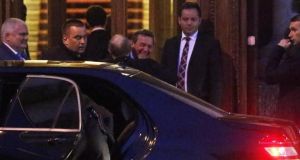 As pro-Russian forces in Ukraine hold four German citizens hostage, the former leader greeted Mr Putin with a bear- hug at his party in the Jussupow Palace on Monday evening.

Berlin was quick to distance itself from the former Social Democratic (SPD) leader after photographs of the party were published by the Bild tabloid yesterday.

Mr Schröder was in St Petersburg to attend a board meeting of the Nord Stream gas pipeline consortium, controlled by the state-owned Gazprom. Mr Schröder enjoyed a close relationship with Mr Putin during his seven-year term. He was criticised when, shortly after losing power in 2005, he took up a position with the project he pushed as German leader.

Criticism is even more heated this time, as pro-Russian separatists hold seven monitors from the Organisation for Security and Co-operation in Europe, including three German officers and a German interpreter.

Photographs of the party appeared as Gazprom warned that Ukraine’s unpaid gas bills endangered the support of supply for western Europe.

Members of Mr Schröder’s SPD did their best to defend their former leader. “I don’t know what the [former] chancellor said to Mr Putin during their private meeting,” said the SPD’s Bundestag floor leader, Thomas Oppermann.

“But I’m sure he made clear that the Russian president must do what he can to free the hostages and end the destabilisation of eastern Ukraine.”

The media reaction yesterday ranged from negative to damning. “He clearly forgets that one has responsibilities also as a former government head,” said Der Spiegel .