Ukrainians in Ireland: ‘All our hearts are crying now’

Following an emotional celebration of the 200th anniversary of the birth of Ukrainian poet and national hero Taras Shevchenko at a Ukrainian school in Dublin 15, we spoke to expats to hear their view on the current crisis. 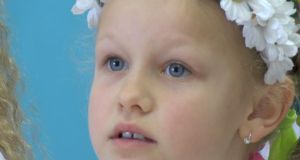 One of the children who gave a recital in traditional Ukrainian dress at a celebration of the 200th anniversary of the birth of Ukrainian national hero Taras Shevchenko in Dublin at the weekend.

Families gathered at the Ukrainian School in Carpenterstown, Dublin, on Saturday for an emotional celebration of the 200th anniversary of the birth of Ukrainian poet and national hero Taras Shevchenko.

While children in traditional Ukrainian dress prepared for a recital, parents spoke of their sadness and anger at Russia’s seizure of Crimea, and expressed concern that the situation will escalate to war.

Nataliya Rutska, who has lived in Dublin for 10 years, said: “We are here, but our hearts have always been in Ukraine. and of course, all our hearts are crying now. We are in pain and we are being torn apart.”

Ms Rutska called Russia’s seizure of Crimea an “artificially created crisis”. Like the other parents at the school, she does not believe Russian president Vladimir Putin’s claim that one of the reasons he deployed forces is to protect Russian-speakers in the region. They believe Russia’s intention was always to annex Crimea.

Alexander Yavorskyy, who is from Lviv in western Ukraine, has lived in Dublin for 11 years and is the president of the Association of Ukrainians in Ireland.

Describing the community here, he said: “People are very upset. Some people have already been into Ukraine several times. We collected money to support Maidan [Independence Square].

“We just simply stay in front of TVs like 24 hours a day.”

He said he does not know anyone in the Ukrainian community in Dublin who supports Russia’s actions, whatever language they speak.

“We are very thankful to Putin that he started those troubles. Because of that, we know that Ukraine is a joint nation and Ukraine is a peaceful nation,” he said.

Mykhaylo Fedynyshyn, who fears for the safety of his parents and sisters living in Ukraine, said: “If anyone starts shooting, it’s going to be a war.”