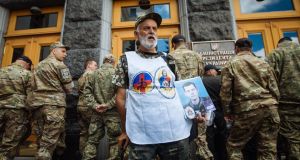 A Ukrainian man holds a portrait of his lost relative during a rally near the presidential office in Kiev today. Photograph: Roman Pilipey/EPA.

Ukraine’s government kept up military pressure against pro-Russian rebels today, threatening them with an “nasty surprise”, while the militants said they were preparing to fight back after losing their main stronghold.

President Petro Poroshenko, drawing confidence from the fall of the rebel bastion of Slovyansk at the weekend, named a new chief of military operations in the east following his appointment of an aggressive new defence minister who again demanded the separatists lay down their arms.

A security official said the government’s plan to clear rebels from the two big towns of Donetsk and Luhansk would come as an “nasty surprise” for the insurgents.

But Mr Poroshenko - whose officials have ruled out any more unilateral ceasefires - kept the door open to a further round of indirect peace talks with separatist leaders, naming a possible venue in a government-controlled monastery-town in the east.

The fall of Slovyansk marks a major breakthrough in Kiev’s three-month long fight against Russian backed-rebels who are now calling in vain for military help from Moscow.

A rebel leader however played down the loss of Slovyansk as a military expedient and said the hundreds of fighters who were able to move from the town to the regional capital Donetsk were preparing a command structure to defend that city and hit back:

Sporadic shooting was heard from various parts of Donetsk overnight. In Luhansk, a city on the border with Russia where rebels also control key buildings, two people in a minibus were killed by a shell that exploded nearby, a municipal official said.

“There is an exchange of fire among the separatists. They are shooting at each other,” Iryna Verigina told a Ukrainian television station by telephone from Luhansk.

Mr Poroshenko, installed in office just a month ago, named Vasyl Grytsak to head the “anti-terrorist centre”, making him operational chief in the drive to crush the rebels.

The move continued his shake-up of the military and security leadership in which he has appointed a hardline defence minister to bring fresh vigour to the fight against the insurgency.

Mr Grytsak, a 53-year-old police lieutenant-general and 20-year veteran of the state security apparatus, replaces Vasyl Krutov, who had headed the “anti-terrorist centre” since mid-April.

Despite some successes against the rebels, Mr Krutov and other security officials have come under criticism for the patchy performance of the armed forces and big military losses including the downing by the rebels of an Ilyushin Il-76 plane in June with the deaths of more than 49 crew and servicemen.