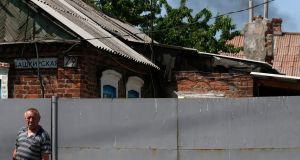 Ukraine launched air strikes and a paratrooper assault against pro-Russian rebels who seized an airport today, even as its newly elected leader vowed to reassert control in the east and refused to negotiate with “terrorists”.

Ukrainians rallied overwhelmingly in an election yesterday behind Petro Poroshenko, a billionaire owner of chocolate factories and political veteran, hoping the burly 48-year-old can rescue the nation from the brink of bankruptcy, civil war and dismemberment by their former Soviet masters in the Kremlin.

Today’s rapid military response to separatists who seized the airport in Donetsk appeared to be a defiant answer to Moscow, which said it was ready for dialogue with Mr Poroshenko but demanded he scale back the armed forces’ campaign in the east.

Gunfire and explosions could be heard as a warplane flew over Sergei Prokofiev International Airport hours after truckloads of armed rebel fighters arrived and seized a terminal building. Thick black smoke rose from within the perimeter.

Spokesmen for the government’s operation in the east said warplanes and a helicopter had carried out the air strikes and paratroopers had been flown in.

The airport serves a city of one million people that the rebels have proclaimed capital of an independent “people’s republic”, and where they succeeded in blocking all voting in Sunday’s election.

Their attempt to seize the airport may have been intended to prevent Mr Poroshenko from travelling there: he has said his first trip in office would be to visit the restive east.

Even as the fighting was getting under way, Poroshenko was holding a news conference in Kiev promising to talk with those in the east who have grievances, but not to those who have taken up weapons.

“They want to preserve a bandit state which is held in place by force of arms,” he said. “These are simply bandits. Nobody in any civilised state will hold negotiations with terrorists.”

Preliminary results with about half of votes counted gave Mr Poroshenko 53.7 per cent of the vote - towering over a field of 21 candidates with enough support to avert a run-off. His closest challenger, former premier Yulia Tymoshenko, secured just 13.1 per cent and made clear she would concede.

Mr Poroshenko made clear his most urgent task is finding a modus vivendi with the giant neighbour that has seemed poised to carve Ukraine up since a popular revolt toppled a pro-Russian president in February.

“I hope Russia will support efforts to tackle the situation in the east,” Mr Poroshenko said. He said he planned to meet Russian officials in the first half of June.

Ukraine’s “anti-terrorist” military operation against rebels in the east would press on but must be more effective, he said: “Protecting people is one of the functions of the state.”

So far, Ukraine’s military forces have had little success against rebels who have declared independent “people’s republics” in two provinces of the eastern industrial heartland.

Ukrainian officials say they have held back from using full force in part to avoid provoking an invasion from tens of thousands of Russian troops massed on the frontier. Questions have also been raised about Ukrainian forces’ training, equipment and loyalties.

“The rebels are in the terminal. The rest of the airport is controlled by the Ukrainian national guard,” airport spokesman Dmitry Kosinov told Reuters before gunfire broke out.

The Ukrainian joint forces security operation in the region said a deadline for the rebels to surrender expired and two Sukhoi Su-25 jets carried out strafing runs, firing warning shots. A MiG-29 jet later carried out another air strike.

The militants then spread out across the territory of the airport, whose state-of-the-art main terminal was built for the 2012 European soccer championships held in Ukraine.

“Right now at the airport, paratroopers have landed and are cleaning up the area,” said a Ukrainian security spokesman.

Russian president Vladimir Putin, who last month described eastern Ukraine as ‘New Russia’, has made more accommodating noises in recent days. He promised at the weekend that Moscow would respect the will of Ukrainians, and Foreign Minister Sergei Lavrov repeated that promise on Monday in saying Russia was ready for dialogue with Mr Poroshenko.

Western countries put little faith in Mr Putin’s promises, saying he has repeatedly announced he would pull troops from the frontier without doing so. They dismiss Russia’s denials that it has aided the rebels, whose Donetsk force is led by a Muscovite the EU describes as a Russian military intelligence officer.

Even though millions of Ukrainians were unable to vote in the eastern regions because of armed separatists, Mr Poroshenko’s sweeping margin of victory gives him a firm mandate that makes it harder for Moscow to dismiss him as illegitimate, as it did in the case of the interim leaders he will replace.

Many Ukrainians clearly rallied behind the frontrunner as a way to demonstrate national unity, three months after a pro-Russian president was ousted in a popular revolt and Moscow responded by seizing the Crimea peninsula, massing troops on the frontier and expressing sympathy with armed separatists.

A veteran survivor of Ukraine’s feuding political class, Poroshenko has served in cabinets led by figures from both sides of Ukraine’s pro- and anti-Russian divide, giving him a reputation as a pragmatist who can bridge differences. That could protect him from the accusations of strident nationalism Moscow aimed at the interim leaders.

He threw his weight and money behind the revolt that brought down his Moscow-backed predecessor in February and campaigned on a platform of strengthening ties with Europe.

Yet it remains unclear how the tycoon can turn firmly westward as long as Russia, Ukraine’s major market and vital energy supplier, seems determined to maintain a hold over the second most populous ex-Soviet republic.

“He has taken a heavy burden on his shoulders,” said Larisa, a schoolteacher who was among crowds watching the results on Independence Square, where pro-Western ‘EuroMaidan’ protests ended in bloodshed in February that prompted President Viktor Yanukovich to flee to Russia. “I just want all of this to be over. I think that’s what everybody wants.”

In the eastern Donbass coalfield, where militants shut polling stations cutting off some 10 per cent of the national electorate from the vote, rebels scoffed at the “fascist junta” and announced a plan to drive out “enemy troops”.

More than 20 people were killed in the region last week.

Although Mr Putin told an international audience at the weekend he was ready to work with a new Ukrainian administration, Russia could still use the gaps in the election in the east to challenge its legitimacy.

A senior member of Mr Putin’s party, deputy parliamentary speaker Sergei Neverov, gave a taste of that when he wrote on Facebook: “It is hard to recognise the legitimacy of elections when tanks and artillery are wiping out civilians and a third of the population is driven to the polling stations at gunpoint.”