Ukraine and Russia could forge peace without Minsk deal - US 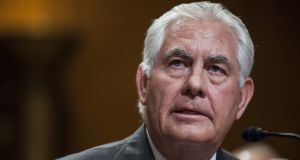 US secretary of state Rex Tillerson told members of Congress the Minsk deal was not the only route out of the conflict Ukraine-Russia conflict. Photograph: Zach Gibson/Getty Images

US secretary of state Rex Tillerson has said Russia and Ukraine could solve their conflict without the beleaguered Minsk peace plan, in comments that suggest Washington may be preparing to intensify its own efforts to end more than three years of fighting.

The Minsk deal of February 2015 was brokered by Germany and France and signed by representatives of Kiev, Moscow and Russian-backed separatists from eastern Ukraine, but it has failed to halt a conflict that has killed 10,000 people and displaced 1.5 million.

Officials from Ukraine, Russia, Germany and France meet frequently to discuss implementation of the largely ineffective agreement, but the US administration of Donald Trump now appears to be seeking a bigger say in the issue.

Amid reports that Ukrainian president Petro Poroshenko would meet Mr Trump in Washington as early as next week, Mr Tillerson told members of the US Congress that the Minsk deal was not the only route out of the conflict.

“It is very possible that the government of Ukraine and the government of Russia could come to a satisfactory resolution through some structure other than Minsk but would achieve the objectives of Minsk, which we’re committed to,” Mr Tillerson told a hearing of the House of Representatives foreign affairs committee.

When asked whether the US should ease sanctions on Russia before it complied with the Minsk deal, Mr Tillerson requested more “flexibility” - a term that will alarm those who suspect Mr Trump is intent on forging closer ties with Moscow despite its continued aggression in Ukraine and alleged interference in last year’s US elections.

“I think it is important that we be given sufficient flexibility to achieve the Minsk objectives... I wouldn’t want to have ourselves handcuffed to Minsk if it turns out the parties decide to settle this through a different agreement,” Mr Tillerson said on Wednesday.

While insisting that “Russia must be held accountable for its meddling in US elections”, Mr Tillerson said Mr Trump must have “the flexibility to adjust sanctions to meet the needs of what is always an evolving diplomatic situation...to turn up the heat when we need to, but also to ensure that we have the ability to maintain a constructive dialogue” with Moscow.

Germany and France remain committed to the Minsk process, but Ukrainian and Russian officials have expressed willingness to see the US play a stronger role on the issue.

Under former US president Barack Obama, then assistant secretary of state Victoria Nuland held talks on Ukraine with senior Kremlin aide Vladislav Surkov. No successor to Ms Nuland appears to have been appointed, however.

The US Senate voted on Wednesday for new sanctions to punish Russia for interfering in the US election, and to oblige Mr Trump to secure Congress’s backing before easing existing measures.