UK told Brexit talks will not proceed without Border ‘backstop’

‘There will be no withdrawal treaty if there isn’t a backstop dealing with the Irish Border,’ says Coveney 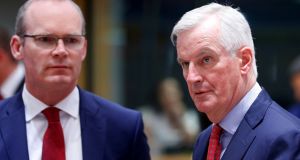 The UK must make significant progress on an Irish Border “backstop” agreement by June for EU withdrawal talks to continue, Tánaiste and Minister for Foreign Affairs Simon Coveney has said.

Mr Coveney was speaking in Brussels to journalists after a long meeting with EU chief negotiator Michel Barnier at which, he said, it was clear the EU task force and the Irish Government remain “of the one mind” on their approach.

Mr Coveney seemed keen to dispel recent media suggestions that Ireland may be willing to soft-pedal on the thorny backstop issue at the June summit if the UK is able beforehand to bring forward viable proposals on an alternative “customs partnership” or what he calls a “shared customs space”.

“I agree with him [Barnier] there will be no withdrawal treaty if there isn’t a backstop dealing with the Irish Border in that treaty,” Mr Coveney said.

The backstop , a fallback position or guarantee that there will be no infrastructure on the Border and commitment by the UK to maintaining North-South regulatory alignment, is part of the proposed Withdrawal Agreement that is supposed to be finalised by October.

Discussions in the “future relationship” strand of the talks on a customs relationship between the EU and UK remain stalled because the British government is divided over its approach.

Ireland and the Commission have been demonstrating a new willingness to explore what is reported to be the British prime minister’s preferred option, a customs partnership, of which they are sceptical. It would see the UK operating as an external border for the EU and levying its tariffs on its behalf.

Mr Coveney is adamant, however, that London must present its proposals within the next few weeks; “if there is a new approach that can held get us there then we’re happy to talk about that, as is the Barnier task force.”

By getting us “there”, he made clear, he meant to the “same outcome” as that envisaged in the backstop agreement, if by different means.

“I think that the concept of a shared customs space is something that certainly from an Irish perspective we would like to see some thinking from the British side... I don’t think it’s any secret that the Irish Government would like to see Britain and the EU sharing the same customs territory in the future. It would make a lot of the other problems that are very difficult to solve right now a lot easier to resolve.”

It is not clear how the ideas of “shared customs space” and “customs partnership differ precisely except that the name of the former may be seen as more politically palatable to Brexiters.

But, Mr Coveney said, “the issue in relation to a shared customs territory in the future is more than likely to be an issue for the future relationship negotiations which is of course going to take a lot more time than hopefully concluding a legally operable text for a withdrawal agreement which we’re hoping to have concluded by the end of October.

“And that is why we have said it is really important to have substantial progress by the end of June because I think people will find it difficult to accept that there is credibility in a process that is hoping to conclude by the end of October if some of the more difficult issues in those negotiations aren’t at least taking shape by the end of June...

“If it’s not possible to make sufficient progress by the end of June then I think there is going to be a difficult summer ahead.”