Two-thirds of energy sector will have to be left undeveloped, Bonn conference told 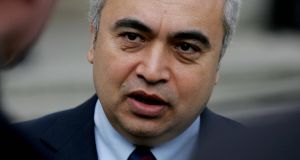 International Energy Agency chief economist Fatih Birol: “Globally, the direction we are on is not the right one. If it continues, the increase would be as high as 5.3 degrees – and that would have devastating effects on all of us.” Photograph: David Sleator

About two-thirds of all proven reserves of oil, gas and coal will have to be left undeveloped if the world is to achieve the goal of limiting global warming at two degrees Celsius, according to the chief economist at the International Energy Agency.

Addressing participants in the latest round of UN climate talks in Bonn, Fatih Birol said this should be an “eye-opener” for pension funds with significant investments in the energy sector – particularly in coal – as well as for ratings agencies.

He predicted coal would be hardest hit in the “unburnable carbon” scenario, followed by oil and gas. “We cannot afford to burn all the fossil fuels we have. If we did that, it [average global surface temperature] would go higher than four degrees.

‘Devastating effect’
“Globally, the direction we are on is not the right one. If it continues, the increase would be as high as 5.3 degrees – and that would have devastating effects on all of us.”

Instead of ignoring it, energy companies had a “crucial” role in confronting the challenge of climate change. “We think the energy sector cannot afford to be isolated – not just for moral reasons, but also for the business perspective.”

Dr Birol delivered his address a day after the energy agency published its latest special report, Redrawing the Energy-Climate Map, which called on governments to take action between now and 2020 to ensure the two-degree target could be achieved.

Looking at positive developments, he cited China’s closure of 70 of its worst-performing coal-fired power stations and said other countries should follow suit – an open invitation to the Government to switch Moneypoint in Co Clare to gas.

Dr Birol said US greenhouse gas emissions had fallen back to the mid-1990s level, largely due to cheaper gas replacing coal for electricity generation.

“This is huge . . . revolutionary,” he said, attributing the change to widespread fracking of shale gas.

Dr Birol was speaking as one of the key strands of the UN talks fell apart due to Russian obstruction.