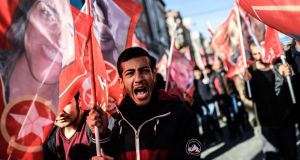 People protest at the Istanbul funeral of Aziz Guler, a Turkish Kurd killed in September after stepping on a mine in Syria. Photograph: Ozan Kose

As the land bridge separating the European Union from Islamic State-controlled parts of Syria, Turkey’s role in countering terrorist attacks in Europe is set to be a central issue at tomorrow’s joint summit in Brussels. The talks, called to discuss refugee flows into Europe and Turkey’s EU accession plans, have taken on a heightened importance in light of the Paris attacks and Turkey’s downing of a Russian military jet.

French and Belgian representatives will be keen to bring up the point that many of the Paris terrorists passed through Turkey en route to Syria. Brahim Abdesalam was deported from Turkey to Brussels this year when Turkish authorities suspected he intended to join Islamic State, also known as Isis.

Omar Mostefai, one of the Bataclan killers, travelled to Turkey two years ago, though no record of his leaving has been recorded. Despite an arrest warrant being issued for the second Bataclan bomber, Samy Amimour, he is believed to have left Isis-controlled Syria and returned to France this year, most likely though Turkey.

Fingerprints taken from a suspected bomber following the Stade de France attack match those of a man who passed from Turkey to the Greek island of Leros, while last weekend a Belgian man suspected of scouting targets in Paris was arrested in the Mediterranean city of Antalya.

Turkey claims to have cracked down on foreigners travelling to and from Syria and, in the aftermath of the Paris attacks, detained 46 suspected Isis militants, including 20 in Antalya and a further 41 at Istanbul’s Ataturk airport. Authorities here also maintain a database of 26,000 people banned from entering Turkey.

But Turkey, too, has been far from immune to the kind of violence that rocked Paris. On October 10th, the country’s worst terrorist attack yet killed 103 activists and trade unionists when two suicide bombers thought to be linked to Isis blew themselves up at a peace rally in Ankara. Last year, dozens of Turkish diplomats and workers were kidnapped (and later released) by Isis in Iraq.

More recently, a computer belonging to a suspected Isis supporter and seized in Diyarbakir mapped out 27 targets for attack around Turkey, including against the G20 summit in Antalya two weeks ago.

Turkish officials have repeatedly claimed they are determined to detain suspected jihadists entering from Syria and through the country’s airports. As prime minister Ahmet Davutoglu wrote in the Washington Post in July, Turkey faces a unique threat because “No other Nato country has had to share a border with Daesh [another name for Islamic State].”

Although Turkey is building portable walls to stop illegal passage across its Syria border, the AK Party government is unwilling to close it completely as it feels doing so would leave civilians at the mercy of Isis and the Syrian military’s barrel bombs.

Turkey has sought to strengthen its own network of Syrian rebel groups by allowing many to cross unimpeded. In January 2014, police in Adana province stopped and searched three trucks carrying weapons being escorted by Turkish intelligence officials and believed to have been destined for Syrian Islamist rebel groups.

Amid the scandal, President Recep Tayyip Erdogan insisted the trucks were carrying aid. Meanwhile, the prosecutors responsible for issuing the search warrants have been arrested.

But the surprise visit of German chancellor Angela Merkel to Ankara last month to discuss halting the flow of refugees has fuelled the feeling Europe may look the other way as Ankara continues its crackdown on media and political opponents.

“For France the new priority is clearly Isis,” said analyst Balci. “But for Turkey the objective is still to topple Bashar and then to destroy the PKK.”