Trump raises the prospect of presidential election being rerun 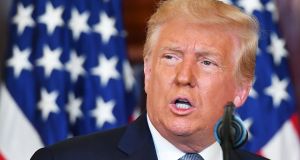 Donald Trump: “It will end up being a rigged election or they will never come out with an outcome. They’ll have to do it again, and nobody wants that.” Photograph: Mandel Ngan/AFP via Getty Images

US president Donald Trump raised the prospect of November’s presidential election being run a second time if universal postal voting is adopted.

Speaking at a White House event marking the centenary of women’s suffrage in the United States on Tuesday, Mr Trump predicted a “rigged election” in November.

“Universal [mail-in voting] is going to be a disaster, the likes of which our country has never seen,” he said. “It will end up being a rigged election or they will never come out with an outcome. They’ll have to do it again, and nobody wants that, and I don’t want that.”

He again hit out at plans by some states to send postal ballots to registered voters in advance of the election.

Controversy around the issue of postal voting has intensified in recent weeks, amid a funding row over the United States Postal Service, and warnings that the mail system may not be able to cope with the increase in mail-in votes and ballot allocations expected because of Covid-19.

Former first lady Michelle Obama urged American citizens to exercise their right to vote in November during her address to the Democratic National Convention on Monday night.

Wearing a gold necklace which spelled the word “vote”, she said: “We’ve got to vote early, in person if we can. We’ve got to request our mail-in ballots right now, tonight, and send them back immediately and follow up to make sure they’re received. And then, make sure our friends and families do the same,” she said, adding that people must “be willing to stand in line all night if we have to”.

Amid a growing public backlash against proposed cuts to the postal service, postmaster general Louis De Joy announced on Tuesday that he would suspend any operational changes until after the election.

“There are some longstanding operational initiatives – efforts that predate my arrival at the postal service – that have been raised as areas of concern as the nation prepares to hold an election in the midst of a devastating pandemic,” Mr Trump’s appointee announced in a statement.

“To avoid even the appearance of any impact on election mail, I am suspending these initiatives until after the election is concluded.”

Mr De Joy is due to appear before the House oversight committee on Friday, with the full House of Representatives due to vote on legislation relating to the postal service on Saturday.

Meanwhile, Mr Trump flew to Iowa and Arizona on Tuesday, part of a weeklong series of campaign events timed to coincide with this week’s Democratic convention. His son, Eric Trump, also held an election event in Wisconsin, the state where the Democratic National Convention had been slated to take place.

To mark the 100th anniversary of the 19th amendment – a constitutional amendment which extended the right to vote to women – Mr Trump on Tuesday pardoned Susan Anthony, a suffragette who was found guilty of illegally participating in the 1872 election.

Meanwhile, the Senate intelligence committee released a long-awaited report on Russia’s efforts to meddle in the 2016 election. The Republican-led panel outlined contacts between members of the Trump campaign and Russian individual in the months leading up to the election, though it did not point to any collusion between the Trump campaign and Russia.

In particular, the report found that Mr Trump’s campaign manager Paul Manafort was a “grave counterintelligence threat” and had repeated contacts with individuals connected to the Kremlin.