Thousands stranded in French Alps due to extreme weather

Irish holidaymakers arrive home after being stranded at Chambéry Airport 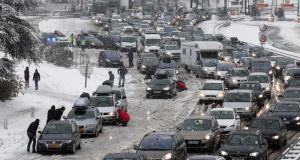 Drivers park to put on snow chains in the middle of a large traffic congestion in the Savoie region in France. A reported 15,000 drivers were stranded and had to be rescued due to the heavy snowfall. Photograph: Muscio Sylvain/EPA

Freak snowfalls and ice yesterday stranded more than 15,000 vehicles in the French Alps, where two people died in the extreme weather conditions and crowds of skiers bedded down at Chambéry airport.

Local authorities across four French départements, where an orange weather alert – the second highest – was in force yesterday, opened makeshift emergency centres on Saturday night in gyms and schools that were quickly overwhelmed by frustrated motorists.

Some families spent the night in their cars, blocked in huge traffic jams on the main routes leading into and out of the Alpine ski resorts.

. There was no police and no information,” one woman told France2. Others took to Twitter to complain, posting pictures of the “hell” at Chambéry airport. Authorities said up to 15,000 people had gone to the 83 emergency centres in Savoie.

The authorities seem to have been unprepared for the heavy snowfall, which came after resorts had closed many slopes last week owing to a lack of snow. On Saturday, 80cm of snow fell on the slopes above 800m, and 30cm lower down.

By yesterday morning the snow had stopped, although weather forecasters were predicting more black ice in subzero temperatures, and snow later in the mountains.

For those who managed to reach the ski slopes there were warnings of possible avalanches. One skier was killed yesterday in an avalanche at the Auron resort in the Alpes-Maritimes, while skiing off piste.

Traffic was still backed up yesterday on the main roads, with motorists determined to reach their holiday destinations. One driver near Albertville said he had driven two kilometres in two hours.

The four départements affected by the weather alert yesterday were Ain, Isère, Savoie and Haute-Savoie.

A 27-year-old man fell to his death on Saturday in the Belledonne mountain range in Isère when his car slipped off a snow-covered road.

Meanwhile, a large group of Irish holidaymakers who had been stranded in Chambéry Airport in Savoie as a result of heavy snow and a technical malfunction on the aircraft have arrived back in Dublin.