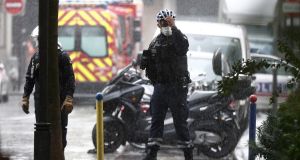 France opened an anti-terror investigation after two journalists were stabbed in Paris on Friday near the former offices of the Charlie Hebdo satirical magazine, which was attacked by Islamist militants in 2015.

Prime minister Jean Castex, who rushed to the scene, said the main attacker had been arrested and that the lives of neither of the wounded was in danger.

A second person was also in custody after the attack, in which witnesses said a meat cleaver or butcher’s knife had been used as a weapon.

A local resident, who heard the attack, said there was a long, deathly shout from “a person who was screaming and screaming”. A neighbour said she saw blood on the ground and people pulling a wounded woman away into a building housing a news agency.

Workers repairing the road told her a man “randomly hit a lady with a big butcher’s knife” in front of a mural that serves as a memorial to victims of the 2015 attack.

A police source said the main suspect was 18, known to security services, born in Pakistan and had been arrested with blood over him. A second source said a meat cleaver had been found on the floor near a metro station.

The attack was carried out in what Mr Castex said was a “symbolic place” and came weeks after the start this month of the trial of 14 alleged accomplices in the 2015 attack.

The court heard that the 14 had sought to avenge the Prophet Mohammad, nearly a decade after the weekly published cartoons mocking him. Al-Qaeda, the militant Islamist group that claimed responsibility for the 2015 attack, threatened to attack Charlie Hebdo again after it republished the cartoons this month.

The national anti-terrorism prosecutor’s office said it was investigating the case. “The government is . . . determined with all its means to fight terrorism,” Castex said, adding that the two victims of Friday’s attack had been taking a cigarette break.

Dr Nathan Messas, who lives opposite Charlie Hebdo’s former offices, saw police emerging from a metro station with a young man in handcuffs. “Once again, hatred, gratuitous hatred. I was here five years ago. Five years later, we’re here again. I don’t know when this is going to end,” he said.

Police moved Charlie Hebdo’s head of human resources from her home this week after threats against her life.

Paul Moreira, a journalist from Premieres Lignes media production company, told BFM TV that two of his colleagues had been wounded. “It’s somebody who was in the road with a meat cleaver who attacked them in front of our offices. It was chilling,” he said.

France has experienced a wave of attacks by Islamist militants in recent years. Bombings and shootings in November 2015 at the Bataclan theatre and other sites around Paris killed 130 people, and in July 2016 an Islamist militant drove a truck through a crowd celebrating Bastille Day in Nice, killing 86.

Far-right and main opposition leader Marine Le Pen said government policy was cowardly. “How many victims would we have avoided by strictly controlling our immigration policy by systematically deporting illegal people by chasing down Islamism?” she said on Twitter, without providing any information on the assailant’s history.