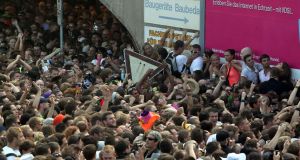 Revellers at the Love Parade in Duisburg on July 24th, 2010, at which 21 people died and 640 were injured in a stampede. Photograph: Daniel Naupold

Paco Zapater has waited almost eight years to learn why his 22-year-old daughter Clara died at the Love Parade in Duisburg.

She and her friend Marta were among the 21 young people – eight men and 13 women – crushed to death in a mass stampede in July 2010 that left 640 people injured in the western German city.

“We have waited 7½ years for this day,” said Mr Zapater, his voice cracking with emotion. “We are here for our daughter, to maintain her dignity and memory and to get justice for what happened.”

After a massive investigation generating 53,000 pages of documents, the interest in Friday’s trial was so great that it was relocated from Duisburg to the trade fair in nearby Düsseldorf.

Despite relief at the trial finally getting under way, many victims’ families are doubtful justice will ever be done.

They have been told to expect a long-running trial but say it is a race against the clock, as the statute of limitations expires on some charges in 18 months’ time.

Six city officials and four staff of the organising company are on trial, but relatives are angry that Duisburg’s ex-mayor, his chief planning officer and the head of the Love Parade promotion company are not among them.

Relatives accuse the three men – allegedly motivated by politics, promotion and profit – of overruling concerns over the venue, a decommissioned freight depot, and the narrow approach road where the crush took place.

“Who carries the responsibility for the death of my son Christian?” asked Gabi Müller. “It was not natural disaster, all looked the other way. They knew what they were doing in the planning.”

The trial almost didn’t happen when a Duisburg court dismissed the charges for lack of evidence, a ruling overturned by a higher court.

On Friday, prosecutors said organisers failed in their duty of care by providing only one access route to a venue they hoped would attracted hundreds of thousands of party-goers.

The Love Parade in Duisburg was a commercial attempt to revive the techno brand after the original summer party was shut down by its founder, DJ Dr Motte.

On Friday, he said he hoped the trial would provide answers for the families of victims. “That’s what matters most,” he said.