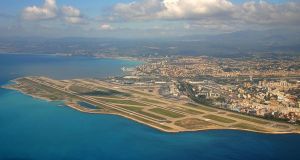 A girl has been arrested at Nice airport. File photograph: Wikimedia

A 16-year-old girl suspected of trying to reach Syria to join Islamist rebels has been arrested in the southeastern city of Nice, France’s interior minister said today.

Interior minister Bernard Cazeneuve said in a statement that border police at Nice airport arrested the girl on Saturday, before her departure “for jihad”.

A man around the age of 20 was later arrested on suspicion of being her recruiter and of purchasing her airline ticket to Turkey, in order to reach Syria.

Thousands of foreign fighters, many from western Europe, have joined extremist Islamist groups fighting in Syria and Iraq, according to US and European intelligence estimates.

France has made clamping down on radicalised Islamist cells a priority, but has not been able to stem a wave of its citizens and others, some as young as 14, from leaving France to join the Syrian civil war.

It estimates that approximately 800 of its citizens have left to join Islamist groups in Syria.

Mr Cazeneuve unveiled measures in April to try to prevent young French Muslims and others from becoming radicalised, including a hotline set up for parents to signal suspicious behaviour in their children.

Authorities have received nearly 300 tips via the hotline, the statement said, 45 percent of which involved women or young girls.

The family of the girl arrested on Saturday was not aware of her intentions, Cazeneuve said.

France’s Muslim community is the biggest in the European Union, at 5 million.