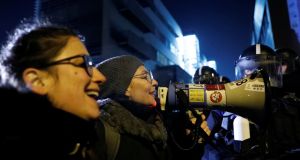 A protest against a proposed new labour law, billed as the “slave law”, outside the headquarters of Hungarian state television in Budapest. Photograph: Bernadett Szabo/Reuters

Thousands of Hungarians who have spent recent nights protesting in icy Budapest intend to make this an uncomfortably hot winter for their premier, Viktor Orbán, who may be facing a tricky new challenge to his increasingly autocratic rule.

Criticism from activists and political enemies is nothing new to the pugnacious populist, but a nascent alliance between previously fractious opposition leaders, civic groups, students and trade unions could pose a more serious threat.

Some 10,000 people joined a rally last Sunday titled “Merry Christmas, Mr Prime Minister”, which was sparked by anger at a new law that obliges employees to work up to 400 hours of annual overtime and wait up to three years for payment.

From parliament beside the Danube, thousands then marched some 7km to the headquarters of state television, where opposition leaders tried to broadcast a petition that showed the scope of protesters’ dissatisfaction with Mr Orbán.

As well calling on the government to scrap the “slave law” on overtime, they urged it to uphold the independence of the nation’s courts and stop pumping out propaganda through public media, and demanded that Hungary join the EU prosecutor’s office to allow outside investigation of state corruption.

After the politicians were prevented from airing their demands and two were thrown out of television headquarters, at least 2,000 people rallied there again on Monday night, when the groups now ranged against Mr Orbán were out in force.

They span the political spectrum, from the nationalists of Jobbik to the Socialists via several centrist parties, and crucially include trade unions that until now have not made common cause with critics of Mr Orbán’s proudly “illiberal” reforms.

Tamas Szekely, deputy head of Hungary’s trade union federation, told protesters that if the country’s president, Janos Ader, gave final approval to the “slave law”, he would call a general strike – something that would hurt Mr Orbán’s image as a friend of the working man and enemy only to the “Budapest elite”.

“The main change with these protests is the role of opposition parties,” said Andrea Virag, a researcher at the Republikon Institute think tank in Budapest.

“Until now, most protests have been organised by NGOs and civil organisations that wanted to keep some distance from political parties ... but now these parties are the leaders of the protests,” she said.

“The unions are significant mainly because they have a big ability to mobilise members, and that could be important. It also shows that all these groups are unified against the new law and against the government – everyone from the Greens to Jobbik to civil society to trade unions – so we see new co-operation between actors.”

Another notable figure at Monday’s protest was Peter Marki-Zay, who stunned the ruling Fidesz party in February by winning a mayoral election in one of its supposed strongholds in southeast Hungary.

He urged the protest leaders to engage with the regions, where Fidesz enjoys near total control and its messages are pushed relentlessly by local and state media, which depict the demonstrators as hooligans controlled by shadowy foreign forces.

What little coverage state television has given to the protests has suggested they are paid by liberal philanthropist George Soros, Mr Orbán’s perennial bugbear.

“But beware when a small minority of foreign-trained activists, representatives of losing political parties and, yes, Soros-network putschists emerge hell-bent on toppling a popular, democratically elected government,” he warned.

“Not much good can come of that.”