Strache under fire as populist FPÖ plunges in Austrian poll 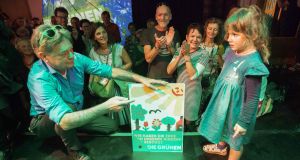 The head of Austria’s Green Party Werner Kogler points at a placard that reads “We only borrowed the Earth from our children” after the first exit polls in Vienna. Photograph: Alex Lalada/AFP/Getty

Supporters of Austria’s far-right populist Freedom Party (FPÖ) have attacked their former leader for a series of scandals that saw a collapse in support in Sunday’s snap election.

The conservative People’s Party (ÖVP) of Sebastian Kurz was the clear winner of the election with over 38 per cent of the vote, up nearly seven points since the 2017 election.

As Austria woke up to a wash of turquoise – the ÖVP party colour – across the country’s electoral map, Mr Kurz has at least three options to form a new coalition. He indicated on Monday he would wait until next week before holding exploratory talks.

That time could be enough to see one option drop off table: a revival of the controversial Kurz coalition with the FPÖ.

Voters punished that party with a nearly nine point slide in support to 17 per cent after two waves of scandal. First, in May, a video was leaked showing then leader Heinz-Christian Strache suggesting he could deliver lucrative state contracts in exchange for political donations from a fake Russian oligarch.

That collapsed the government and triggered the election, but last week’s second wave of scandal – over Mr Strache’s generous use of party funds for private expenses – cost the party even more support.

Mr Strache now faces criminal investigation, including for possible tax fraud, and growing calls for his expulsion from the party he dominated after breaking with his mentor, Jörg Haider.

The disgraced politician has painted himself as a victim, writing on his Facebook page of a “criminal attack, years in the planning, on my person and the FPÖ”.

Readers hit back suggesting he had “ruined completely” the party in just four months after 15 years of work building it up. One said the party’s worst election result in years “rests largely on your shoulders, Herr Strache”. Another said he had “betrayed the FPÖ, which is unsupportable as a party as long as he is not kicked out”.

With Mr Strache still popular in some quarters, expelling him would be a risky move that could split the FPÖ. It could result in him setting up his own political grouping ahead of regional elections, in particular next year’s crucial local election in Vienna.

Leading ÖVP figures on Monday remained tight-lipped about their favoured coalition partner, with Mr Kurz vowing to talk to all parties in the new parliament.

Political analysts suggest that a revival of the grand coalition with the Social Democrats (SPÖ) that ruled until 2017 is possible but not likely.

Another option is a two- or three-way coalition with the Greens and possibly the liberal Neos, with which the Kurz party has a greater policy overlap than the Greens.

The environmental party has made robust climate protection laws and a shift away from hardline migration its price for political support.

“A three-way coalition as an option would be difficult to manage,” said Prof Thomas Hofer, a leading political analyst. He ruled out another conservative populist alliance because “the FPÖ at the moment is just too unstable”.