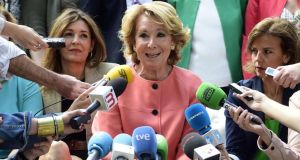 Esperanza Aguirre: The former mayor of Madrid tweeted on Monday that “with Islam”, Spain “would not be free”. Photograph: Gerard Julien/AFP/Getty Images

A senior politician has unleashed a fierce debate about Spain’s relationship with its Islamic past and drawn accusations of racism after celebrating the Christian re-conquest of the country from Muslim rule in the Middle Ages.

January 2nd is the anniversary of the 1492 Catholic victory over Muslim forces defending the prized southern city of Granada for a decade. It is considered a turning point in ending eight centuries of Muslim occupation of the Iberian Peninsula.

Esperanza Aguirre, leader of the conservative Popular Party (PP) in Madrid and a former mayor of the capital, marked the date by posting a comment on Twitter: “Today marks 525 years since the taking of Granada by the Catholic Monarchs. A day of glory for Spaniards. With Islam we would not be free.”

Ms Aguirre completed the tweet with the image of a Spanish flag.

King Ferdinand and Queen Isabella, together known as the Catholic Monarchs, remain divisive figures for Spaniards. Many, like Ms Aguirre, see them as the country’s saviours; others are troubled by their militaristic and often oppressive rule, which saw Jews and Muslims expelled from Spain if they did not convert to Christianity.

Pablo Iglesias, leader of the leftist Podemos, described Ms Aguirre’s views as a “rancid, uncultured and reactionary” version of patriotism.

“I hope Esperanza Aguirre doesn’t also admire the hygienic habits of the Catholic Monarchs,” he added, apparently in reference to their policy towards those of other faiths.

The tweet provoked a lengthy thread. While some of it contained supportive comments, most responses expressed outrage.

“Let’s study the history of our country a bit and put aside racism, Islamophobia, exclusion,” said one user, while others pointed to the oppressive policies of the Catholic Monarchs themselves. The brutality of their chief inquisitor, Tomás de Torquemada, and his acolytes was “fantastic for women,” noted one sarcasm-laced post.

In Granada, annual festivities to commemorate the fall of the city were held as locals dressed up as medieval Moors and Catholics and marched through the city.

In the past the event has led to clashes between traditionalists who defend it and those who criticise it for being jingoistic, but this year it was relatively peaceful with beefed-up security. Although some spectators exchanged insults and pro-Franco flags from Spain’s fascist past were on display, no major incidents were reported.

Spain’s uneasy relationship with its medieval history was recently highlighted in Córdoba, Granada’s neighbouring city, when the local Catholic Church was accused of trying to appropriate the Great Mosque-Cathedral there and whitewash its Islamic past.

After locals mounted a campaign against the move, church authorities appeared to back down, restoring to tourist literature references to the building’s Islamic legacy.