The eight residents of Villarroya, a small town in Spain's La Rioja, have managed to vote in the country's parlimentary elections in 32 seconds, breaking their previous record of 42 seconds. Video: Reuters 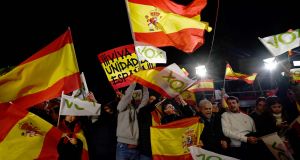 Spain’s acting prime minister, the socialist Pedro Sánchez, has won the country’s second general election of the year, although he fell well short of a majority as the far right made major gains.

The Socialist Party won 120 seats in the 350-seat congress on Sunday, ahead of the conservative Popular Party, which secured 88 seats, with 96 per cent of votes counted.

This was the fourth general election in four years for Spain and follows an inconclusive vote in April. Mr Sánchez’s Socialists won that election but failed to form a new government, triggering this election.

However, this result appears to offer no immediate solution to the country’s longstanding political stalemate, with neither the parties on the left nor those on the right within reach of a workable majority.

The far-right Vox party had the most dramatic surge, more than doubling its seats to 52. Vox, which campaigned for a tougher line against illegal immigration and Catalan nationalism, became the first far-right party to be represented in Spain’s congress, in April. It is now Spain’s third political force.

“Today, we Spaniards exercise our sovereignty,” Vox’s leader, Santiago Abascal, tweeted when voting was under way. He called on the election to bring the country “unity and concord”.

Vox is one of several relatively new parties which have fragmented Spanish politics in the last half-decade, along with Ciudadanos and Podemos, making the formation of parliamentary majorities more difficult.

Ciudadanos, a self-styled centrist party which has veered to the right in recent months, had a disastrous election, seeing its share of seats slashed from 57 to 10.

The leftist Unidas Podemos coalition, which failed to form a governing partnership with the Socialists earlier in the year, suffered some losses to secure 35 seats.

Más País, which was founded in the wake of April’s election by former Podemos deputy leader Íñigo Errejón, makes its debut in parliament with three seats.

A marginally lower turnout than in the April election reflected voters’ exhaustion and disenchantment after the last ballot failed to create a new administration.

Recent unrest in Catalonia, sparked by the jailing of nine independence leaders last month by the supreme court, overshadowed the election. The PP, Ciudadanos and Vox have all been urging Mr Sánchez to intervene in Catalonia to restore order, calls which he has so far resisted. However, the Catalan turmoil seems to have benefitted the PP, which recovered many of the seats it lost in April, and Vox.

Thousands of police reinforcements were deployed to the northeastern region ahead of voting to ensure there were no disturbances on election day. However, although tens of thousands of pro-independence Catalans demonstrated on Saturday, voting took place with few incidents on Sunday.