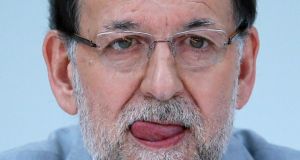 A corruption scandal that has been plaguing Spain’s governing Partido Popular (PP) for months has intensified, with new revelations prompting calls for the prime minister to clear his name or resign.

On Sunday, El Mundo newspaper published what it said were the contents of an original handwritten notebook logging illegal payments made to senior members of the party for years, including prime minister Mariano Rajoy. The document has been handed over to a judge investigating the case. In January, fellow daily El País published photocopied pages of similar notebooks.

The two newspapers say the documents belonged to Luis Bárcenas, a former senator and treasurer of the PP, who has been investigated in recent years for his part in a massive corruption network. Revelations from that probe showed he had stashed up to €47 million in Swiss bank accounts.

In addition, publication on Sunday of an interview with Mr Bárcenas by El Mundo’s editor, Pedro J Ramírez, before the former went to prison last month, has cast further suspicion on the governing party.

In it, Mr Bárcenas confirmed for the first time that “the PP has been financed illegally for at least the last 20 years”, taking cash donations from property firms and other companies.

Damaging
The publication of the latest papers and the interview is particularly damaging for Mr Rajoy, as they suggest he received up to €42,000 annually from the slush fund, including when he was minister of public administrations and minister of education, between 1997 and 1999.

The scandal has been rumbling on since January, but with Spain’s famously slow justice system, the prime minister and his party seemed confident they could deny the charges and ride out the storm.

Yesterday, the PP issued a written statement saying it had no connection to the Bárcenas papers and that “all payments to staff and personnel of the party have always been carried out legally”.

But the political pressure is building. “If it’s shown to be true that [Mr Rajoy] received money when he was a minister and has lied when prime minister, he can’t lead the Spanish government,” said opposition Socialist Party spokeswoman Elena Valenciano yesterday.

Blackmail allegations
She added that Mr Bárcenas, who was only formally fired from the PP in January, is “blackmailing” the prime minister with the revelations.

Her party has repeatedly called on Mr Rajoy to appear before Congress to answer the allegations, but he has refused.

The United Left went further, saying the prime minister should step down immediately.

Yesterday’s political storm came as the IMF revised down its forecast for Spanish growth, announcing that the recession may not end until 2015, as opposed to early next year, as the government had estimated.

Economy minister Luis de Guindos insisted that the Bárcenas affair is not undermining the economy.