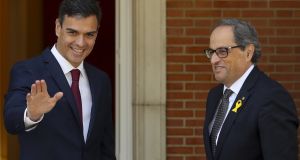 During a highly anticipated meeting with Catalonia’s pro-independence president, Quim Torra, on Monday, Spanish prime minister Pedro Sánchez promised to improve the region’s existing self-government but refused to negotiate the staging of a referendum on secession.

The two-and-a-half-hour meeting, which took place in the prime minister’s residence in Madrid, was the first such encounter between a Spanish leader and a Catalan president since January 2017.

“The most important thing is the normalisation of relations between the Spanish government and president Torra within the constitutional framework and respecting Catalonia’s statutes,” Spain’s deputy prime minister Carmen Calvo told reporters afterwards.

Ms Calvo said that a bilateral commission to facilitate co-operation between Madrid and Catalonia would be restarted after several years of paralysis. She also said the central government wanted to speed up the creation of a new transport link between Barcelona and other Mediterranean cities.

Last month, Mr Sánchez’s Socialists replaced the conservatives of Mariano Rajoy as the party of government. Ms Calvo suggested that the previous administration’s legalistic approach to the Catalan issue would now make way for political engagement.

“For a long time we have been going through a political crisis to which this government wants to respond with politics,” she said.

Mr Sánchez and Mr Torra were photographed walking together through the gardens of the prime minister’s residence. The Catalan leader also presented the prime minister with two books about Catalonia and a bottle of ratafia liqueur, adding to the air of goodwill.

However, in the build-up to the meeting there had been several issues of discord between the two men.

And last week, the Spanish government announced it would present an appeal before the constitutional court against the Catalan parliament’s reiteration of its supposed right to break away from Spain.

The Catalan leader was less effusive about Monday’s encounter than the Spanish deputy prime minister, saying afterwards that “we have been able to compare the visions we have of Catalonia”.

He also highlighted the two areas where his administration and Madrid fail to see eye-to-eye: on the holding of a Scotland-style independence referendum and on the status of jailed independence leaders, whom Mr Torra describes as “political prisoners”.

However, he added that he had “seen a prime minister Sánchez who has listened, who took notes, and I liked that”.

Some pro-independence Catalans had expressed doubts ahead of the meeting, because it was likely to focus on the region’s existing powers rather than secession. Criticism also came from unionists, who underlined the fact that Catalan nationalists had helped Mr Sánchez become prime minister last month in a parliamentary vote.

“Mr Sánchez has to pay a debt to Mr Torra for his support in making him prime minister,” said Albert Rivera, leader of the Ciudadanos party. “But Spaniards should not have to pay off the debts of Mr Sanchez with this kind of humiliation.”

Mr Sánchez and Mr Torra have agreed to meet again, although a date has not been announced.